A garden full of sculptures for Oxfordshire Artweek 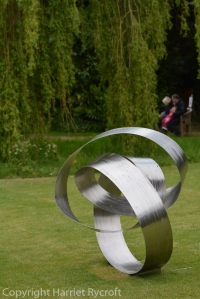 On Bank Holiday Monday Chris and I went to the last day of “Sculpture at Kingham Lodge” in the nearby village of, oh yes, Kingham.  Kingham Lodge has already raised tens of thousands of pounds for good causes with similar exhibitions in previous years and I was pleasantly surprised at the number of people there, obviously the combination of art, garden and charity fund raising is a winning one. There were lots of families playing on the lawns, and quite a few people like us who just wanted a little outing, a bit of art to make us feel cultured, and maybe a cup of tea.

Anyone can be a critic.

As well as local charities, this event supports a group of Zimbabwean sculptors, so their work was on show, mixed with British sculptors’ works in many styles and materials, most of them for sale. There were a lot of works that I didn’t like – but then that is half the fun, anyone can be an art critic!

It’s a very different show to the much more upmarket one at Asthall Manor (although some of the artists overlap), and with over 300 pieces it’s a bit overcrowded. Aesthetically I would have preferred not to be able to see so many sculptures at once, but that would be hard to arrange in such an open garden which is mostly on the same level. It was a case of the more the messier, but possibly also the merrier. I disliked the prominent white number labels and tried to avoid getting those in photos – so I apologise to any sculptors whose work I have failed to identify correctly in this post. Feel free to put me right.

One reason there were so many families there, I guess, was that there were also sculptures made by children from local schools. These were some of my favourite exhibits. They had an exuberance which can be lacking in adult sculpture. Kingham Lodge invites schools to visit and gain inspiration from the exhibition, and grants are given from the funds raised by this Artweek event to various local primary schools and secondary schools to help with their own sculpture projects. I say Hooray for anyone who supports art and music in schools, when those subjects are under so much pressure from politicians who tinker with education and force schools to focus on more easily measurable results.

I liked this combination

I wasn’t terribly keen on the garden itself. It’s one of those places that has had a lot of money spent on it but doesn’t (yet?) have a soul – or at least not one which connected with me. It’s a large garden (5 acres), with some individually appealing features, but for me it doesn’t hang together. I’m sure it will improve as time goes on – and the important thing is that its owners love it and want to share it.

There were some fine planty moments (nice combinations in some of the borders, some lovely shrubs and tree paeonies) but I disliked the sweet jar collection of rhododendrons, partly for their bilious colours, partly because I just can’t handle lots of ericaceous plants in the alkaline landscape of the Cotswolds. 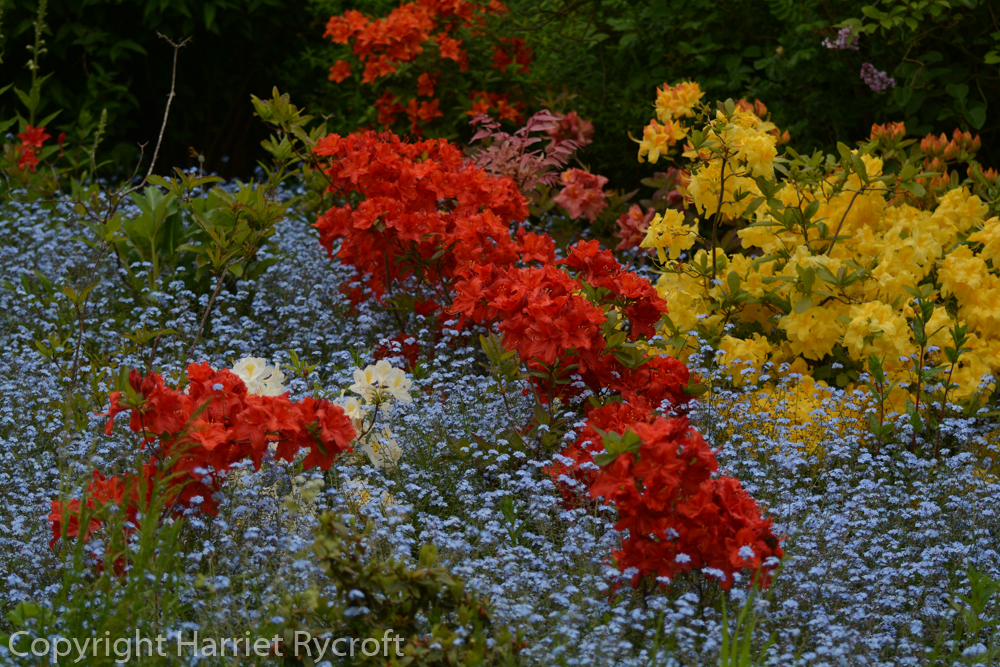 Not my cup of tea

There were some lovely paeonies

Can’t think why I felt more at home in here…

I did love the asymmetric wooden greenhouse tucked away in the little kitchen garden. I can never resist having a nosy in a greenhouse, and there was a small lean-to polycarbonate bonus greenhouse too, which is obviously somebody’s refuge from the world. 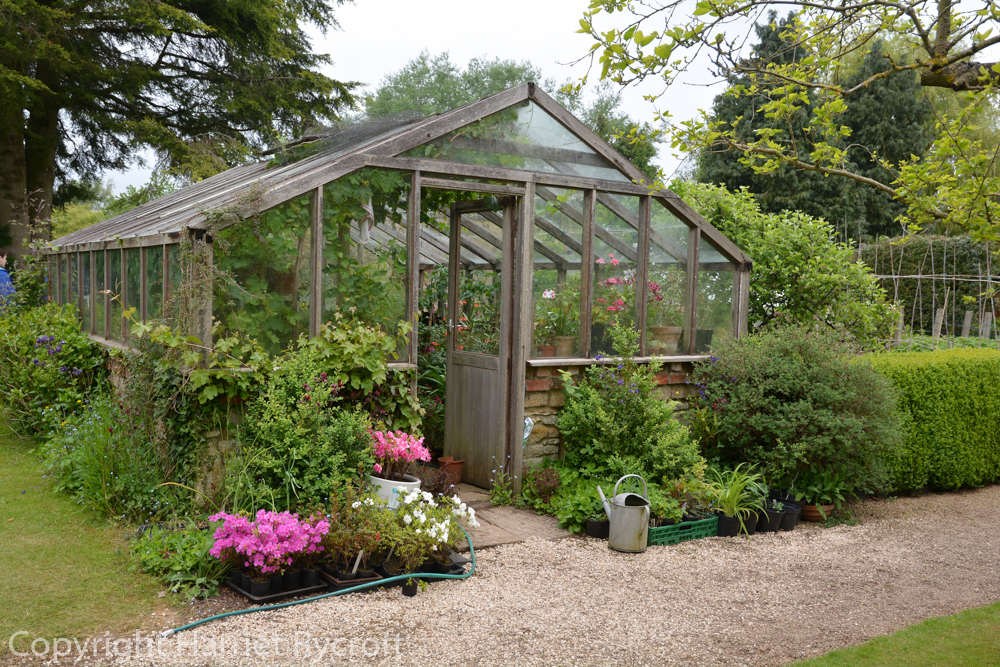 Oh dear, I’ve failed to identify this. But I thought it was well-placed.

There was something of interest for everyone – and that can only be a good thing in an event designed to make art accessible. There were lots of photographers peering at odd angles everywhere. It is great fun trying to get good photos of garden sculpture and it really helps to improve your powers of composition; my biggest missed opportunity was an amusing shaggy dog nose to nose with a stone hippopotamus, sadly its owners noticed me aiming my camera,said “Oh, sorry!”and pulled it out of the way (the dog, not the hippo). Oh well.

Pike on a Trike by Daren Greenhow.
Makes me think about fish needing bicycles…

Leaving the exhibition I experienced the peculiar phenomenon of every day objects turning into sculptures, I looked with a newly trained eye at the world around me as we headed back to the car park.

Nevertheless, my favourite installation of the day was the May-burgeoning bridlepath which headed off between the fields, towards the rain clouds.

I’ll leave you with some more photos, and you can give your own verdicts on the sculptures. 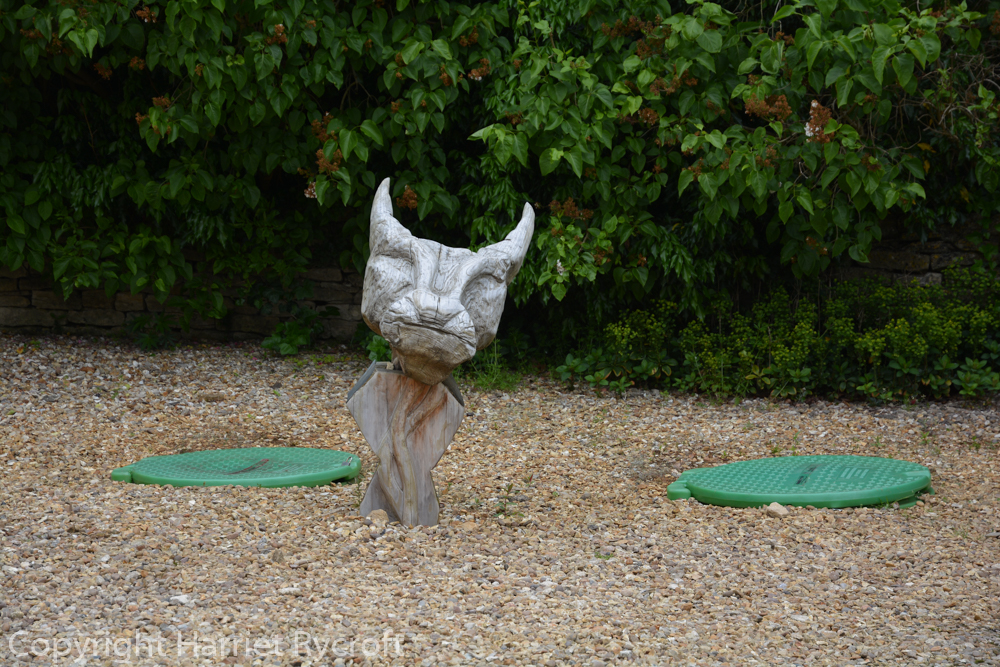 There was even sculpture rising from the septic tank

Some of the “Germs” by Chipping Norton School. We loved these 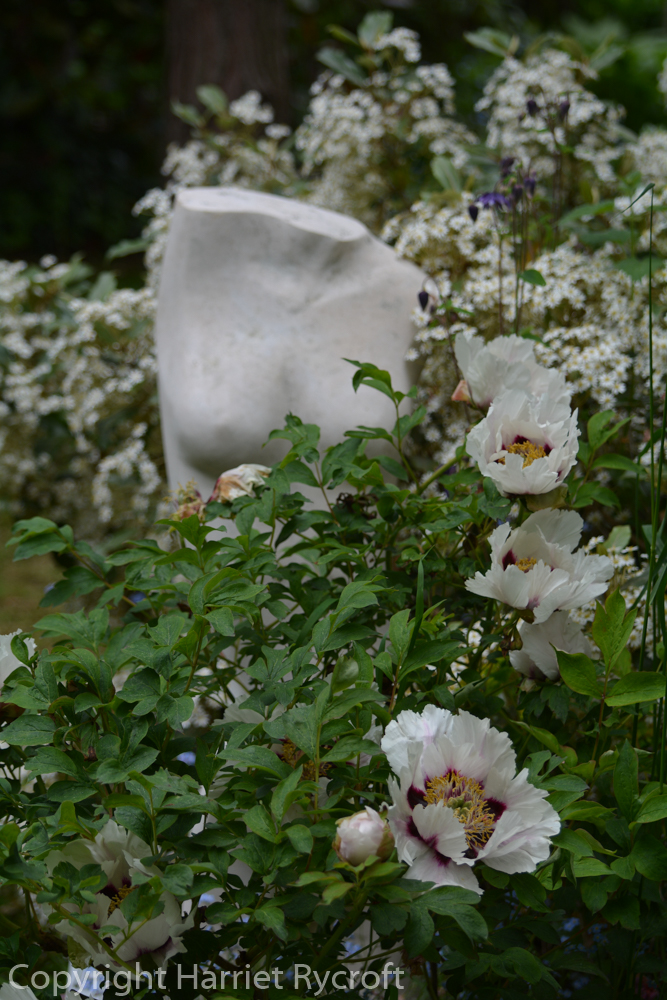 To be honest I was a bit more interested in the Paeonia (rockii?)

No, he’s not commenting on my photography techniques, he’s looking at wire faces hanging from the trees. 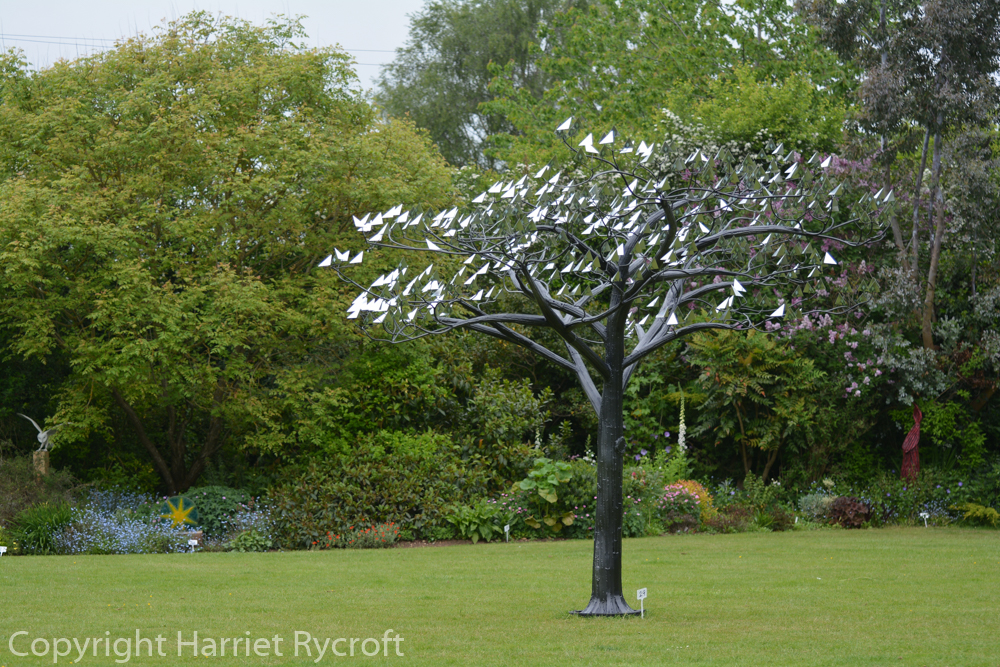 Murmuration, by Richard Cresswell, this was clever – those little triangular things swivelled, and caught the wind and light together. 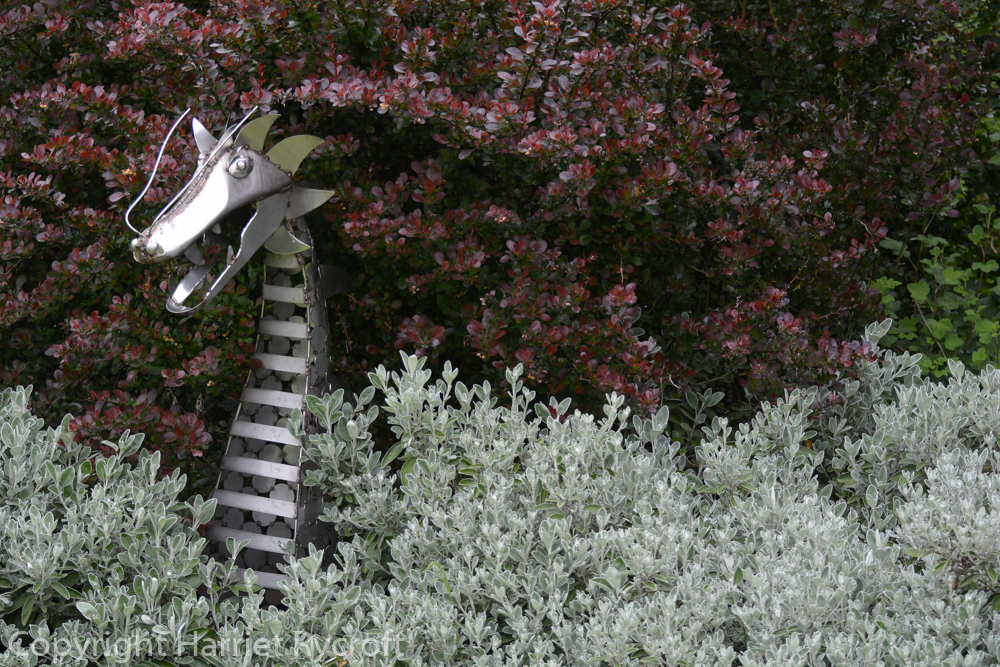 One of the butterflies made by Chadlington Primary School 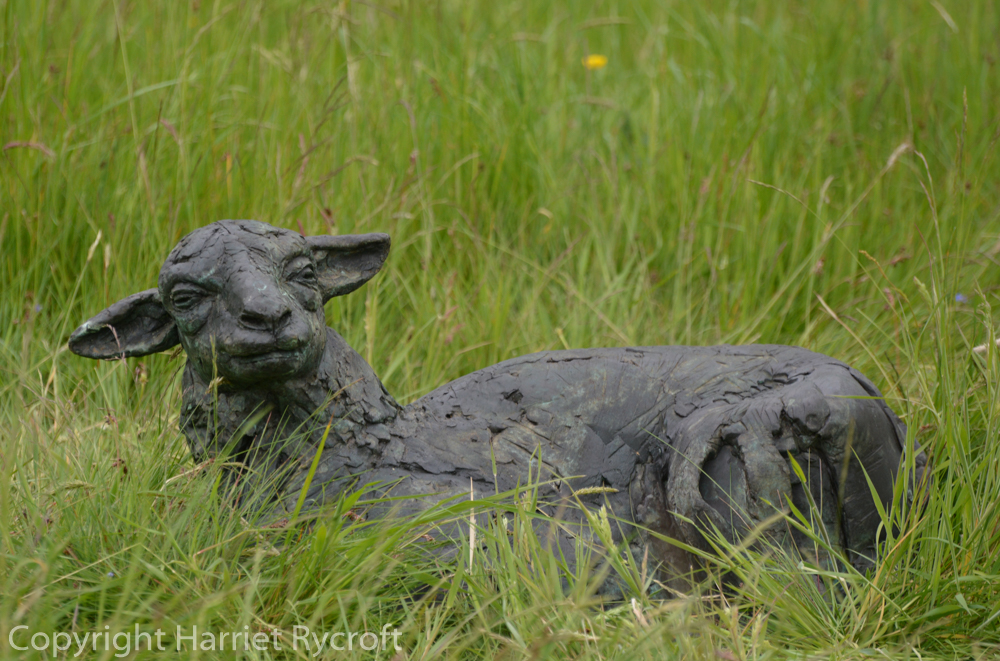 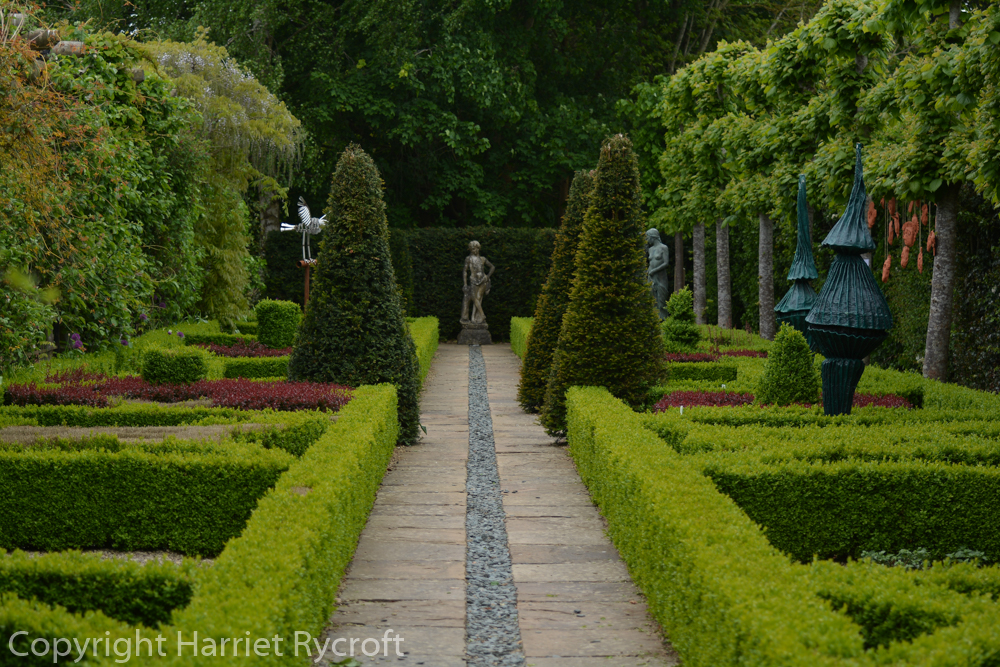 Could be a scene from Doctor Who…