Rosy Hardy looking spookily relaxed about half way through the build.

This year I had a very small part in the making of Chelsea. When Rosy Hardy first told me last autumn that she was going to make a show garden on Main Avenue as well as her usual stupendous display in the Great Pavilion I have to admit that I laughed at her. What kind of madness was this?

I thought about it later, and came to the conclusion that if anyone can pull it off she can. Rosy is cheerful and friendly but has that glint of steely determination behind everything she does; she is very, very focused, and extremely capable, she has a strong team (including her husband, Rob) and really knows her stuff. I also guessed that her garden would be very focused on plants.

So I sent her an message asking to be put on the list of volunteers, even though I knew she would have plenty. I was quite surprised when Hardy’s got back to me to arrange dates, and booked myself in for five days of working on the garden and imposing on the hospitality of London friends. 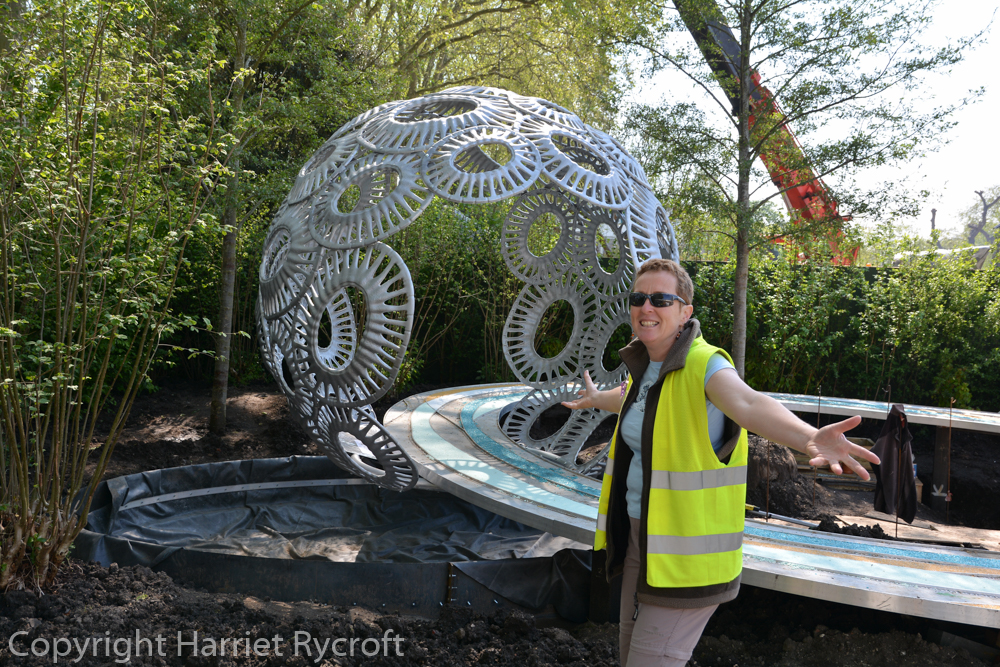 Some of my first views of the garden

The first time I went up to Chelsea to work on the Forever Freefolk garden I was nervous the night before, thinking things like, “What if I, quite literally, put my foot in it?” I have big feet, even bigger when clad in steelies, so I knew there was a distinct possibility of ruining something precious. I’m confident walking about in other people’s herbaceous borders usually but I know that Chelsea gardens are often densely planted and the plants need to be in perfect condition. I knew I was being silly, because I was only a tiny cog in a big machine, but I couldn’t help it.

On the first couple of days the planting team didn’t have an enormous amount to do as there was still a lot of ground work going on, including the finishing of the central path, so we all latched on to any jobs we were given by Rosy – snipping dead twigs or broken leaves from the hedging, tying branches back as invisibly as possible, digging over the soil (removing rubble and, weirdly, shells) when it had been heaped to the right levels. Digging it and forking it again. Forking it again when someone had walked over it to fix a plumbing issue in the future river. Forking it again when someone walked over it to deal with an electricity cable. Raking it level so that it would be ready for planting, while the plants arrived in hundreds. 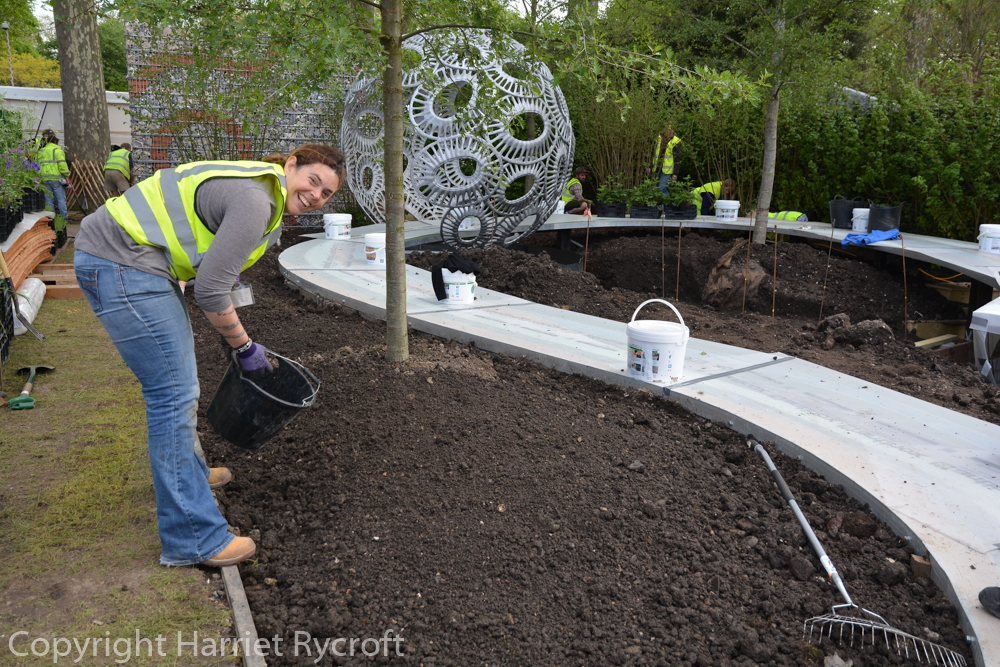 Claire having a busman’s holiday from her gardening business. The path has been covered to keep our muddy boots off it. 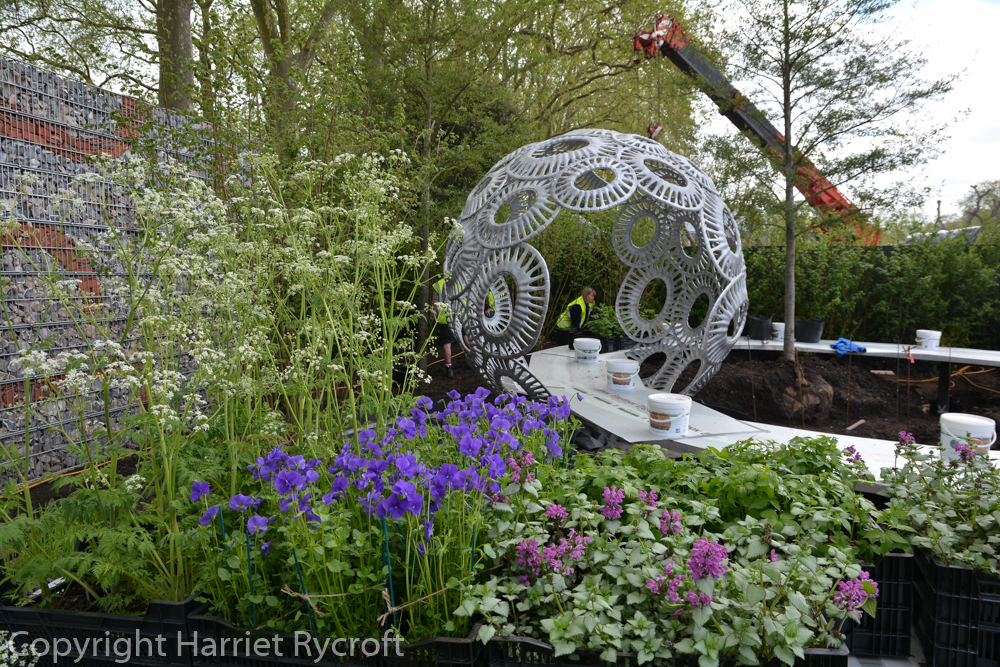 Rosy appeared eerily relaxed throughout, whereas I felt jittery when I didn’t have a job. Luckily I could see that pestering for jobs would be a nuisance so if there was nothing obvious to do I took photographs or just chatted to other team members while we waited. I’m sure one of the reasons Rosy managed to stay sane was the fact that she would occasionally send all of us away to have a walk round the show ground so that she could think. 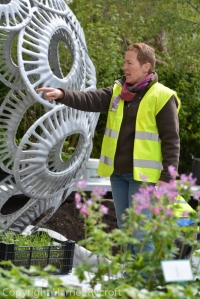 On the second day we got stuck into planting, starting from the back of the garden, with wild/semiwild flora near the hedge boundary, moving to lush shade lovers towards the back of the garden. In awkward corners we planted with a buddy, so that we didn’t have to move too much and could pass plants in carefully. Cow parsley! Who would have thought that I’d end up desperately cherishing Anthriscus sylvestris and trying to plant it around coppiced hazel without breaking its fragile stems? Normally I rip it out, except of course when it is the dark form ‘Ravenswing’. It all makes you think about how arbitrary our boundaries between weeds and garden plants are.

Ben crouched in his corner

In that awkward corner at the back I planted with Benjamin Pope, who is the head gardener of a very smart garden. We both felt nervous at first about placing plants, having to call Rosy over to check our efforts. We agreed that this was peculiar because normally we are both decisive planters and would have finished a much bigger area in no time at all – but this was not our gig. We were trying to be extra pairs of hands for Rosy and had to tune ourselves in to how she wanted the plants to look – remember that she had grown them all herself, so knew them intimately. Even the chunks of wildflower turf had come from her own garden. Eventually we began to be more confident – but then it was time to go home.

I went home for a couple of days, watered my pots deadheaded, blogged, pricked out some seedlings, and came back again for three more days of planting.

The lads with plans 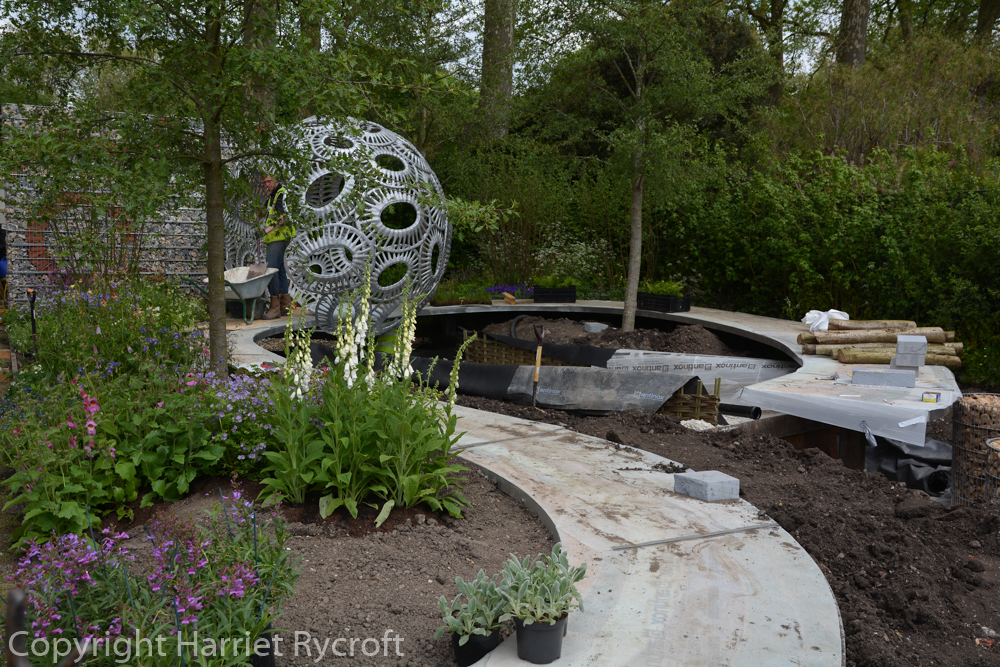 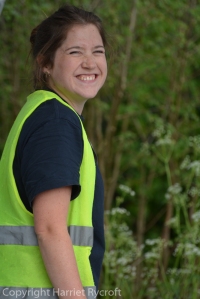 Physically it was hard, working at odd angles because you couldn’t walk among the plants as you would in a normal garden, and you had move gingerly to avoid bruising the newly open foliage of the trees and hedging,  but it was satisfying. I think the greatest challenge for me was the commuting to and fro on stifling tubes and randomly diverted buses – I’m so glad we left London many years ago, I couldn’t take doing those journeys day after day without going completely doolally. 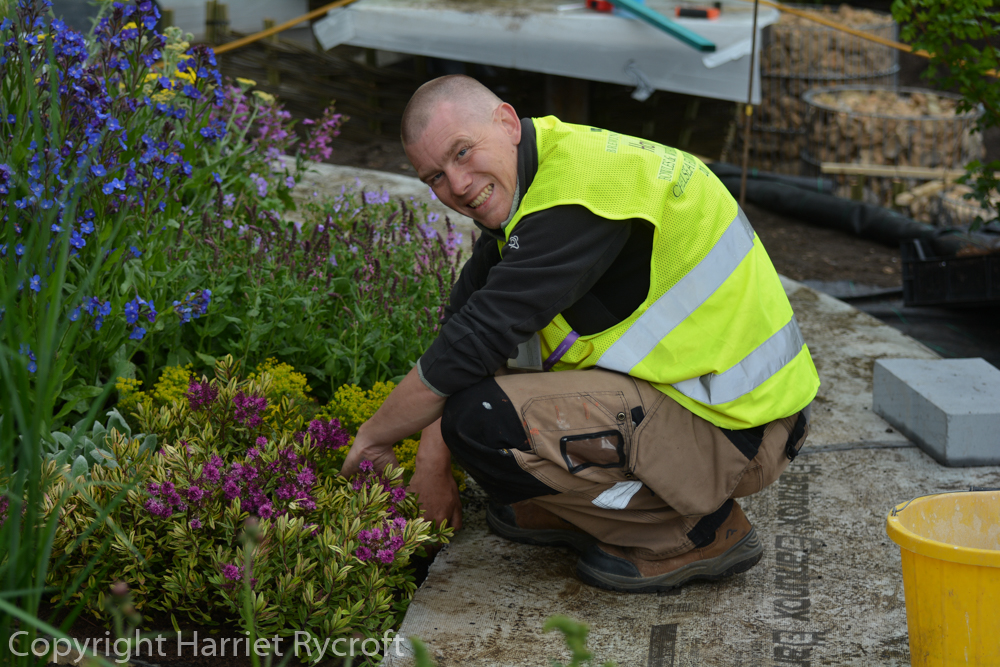 Jack (student)and Yvonne, who was a garden designer – and made the mosaic at the front of the garden. Her high viz vest says “I just do as I am TOLD”

Maggie (Wisley student) and Rocky, who has his own gardening business 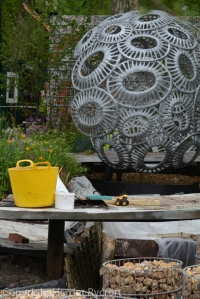 I think working on a Chelsea Show garden is a good exercise for both experienced professional gardeners and new ones – the new ones acquire more skills and experience and so do the old, but the old also get to review their own methods and approaches and compare them to someone else. It’ll confirm some attitudes and change others. Speaking as one of the old ones, I found it refreshing to talk to the students – and I was envious of some of their experiences, travel and placements too. Sometimes I wish I could start all over again!

I was impressed by Rosy and Rob’s management style, calm but firm, they were dealing with such a large and diverse team, working to a crazy deadline and high standards. They knew that basics like having a good shed to put all your stuff in, plus copious amounts of hot and cold drinks, chocolate bars and about a ton of cake go a long way to keeping your workers on task. We heard rumours about other garden teams being much more tense or chaotic and we were grateful to be where we were. We were also lucky that in the final week we could find jobs at the nursery display in the pavilion when there was a lull in the garden.

Building the Hardy’s display in the pavilion 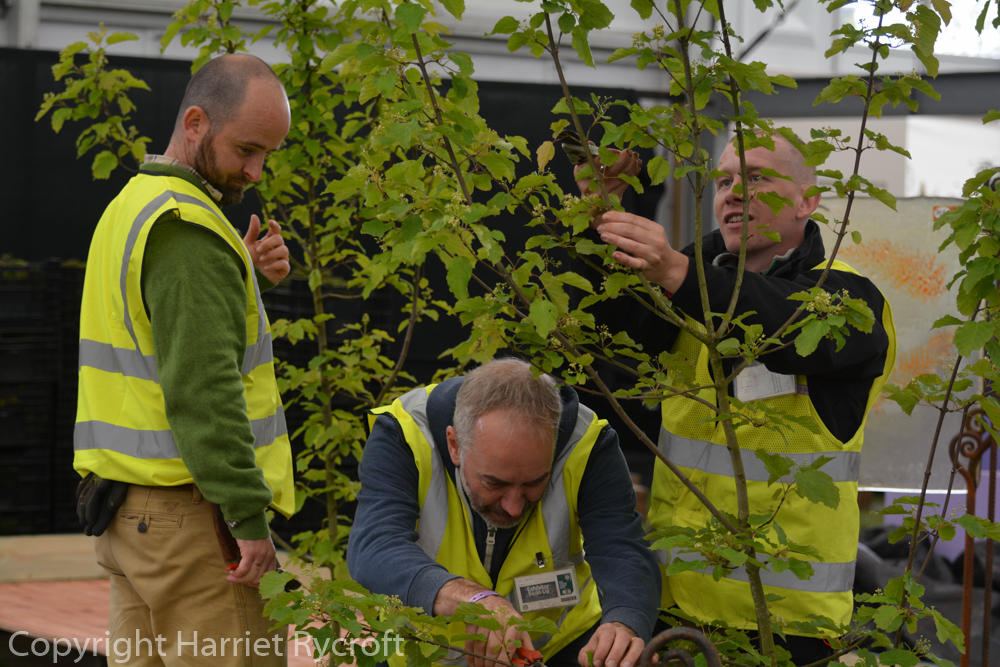 How many gardeners does it take to titivate a tree? Ben, Justin and Andrew.

Rosy issued clear instructions and didn’t micro-manage. She would leave you to place a group of plants and would only tweak where necessary. There is a balance to be struck in a large project like this between achieving the perfection that is in the designer’s head and allowing others to take part – maybe not achieving the perfection it would if the designer could do it all her/himself. Rosy was generous in letting us all have a little piece of Chelsea.

I was sorry to leave on the Thursday before the show opened – not just because I’d miss the final titivation and tweaking but because I’d really enjoyed my time with the team.

Gold in the pavilion and silver for the garden – quite an achievement to get two medals in one Chelsea Flower Show, but also there was the achievement of sharing the experience with others, promoting the nursery and new plant introductions, fulfilling a brief for the sponsor (Brewin Dolphin) and giving it publicity, and highlighting the existence of a rare and vulnerable landscape feature, the chalk stream. All targets met! Here are some pictures of the finished garden, taken on the Monday of Chelsea week. 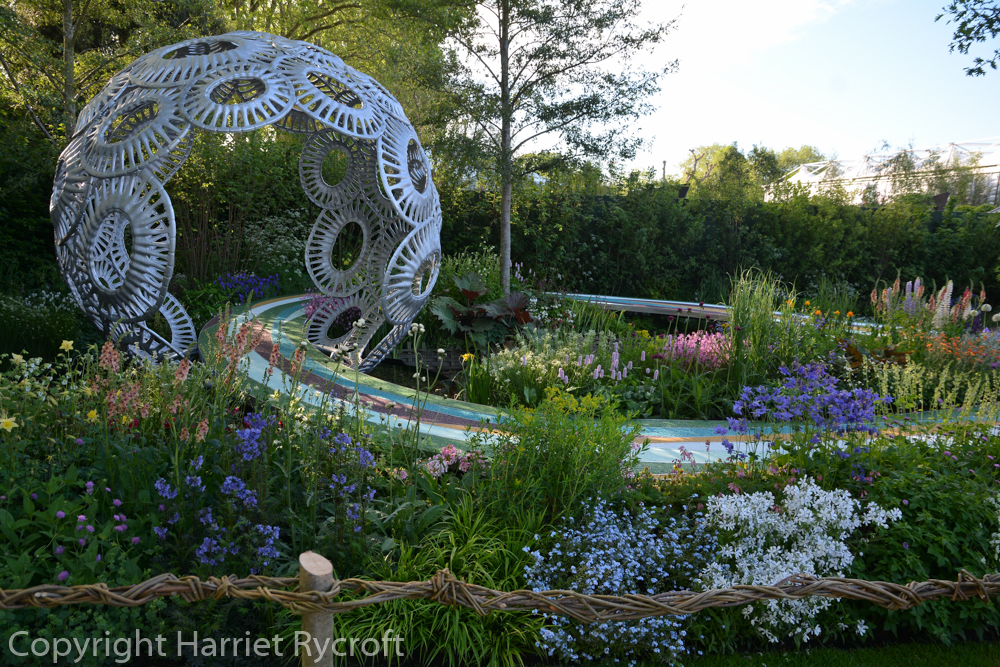 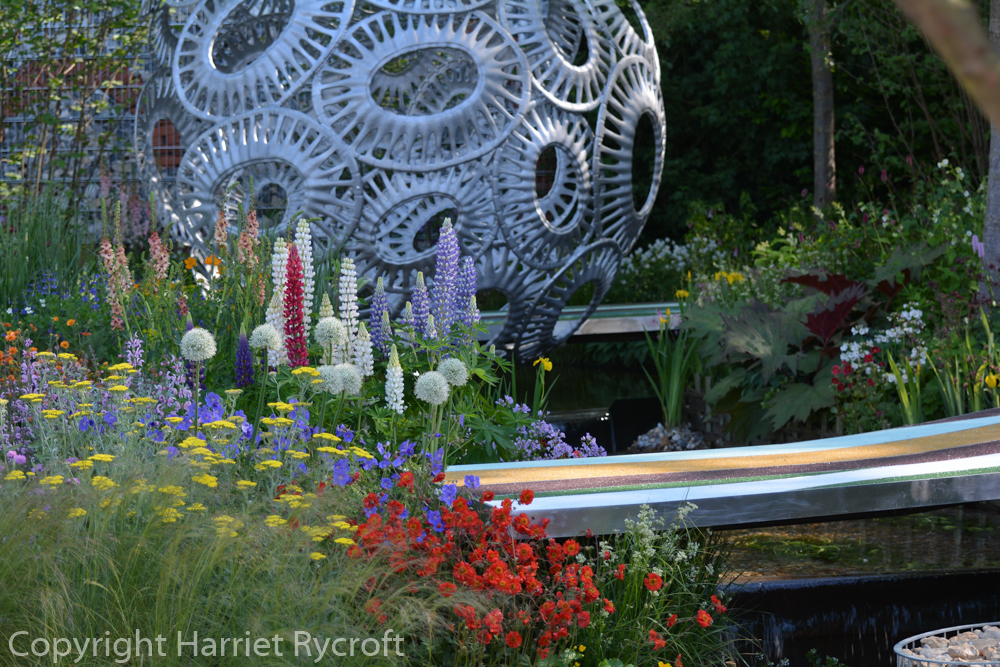 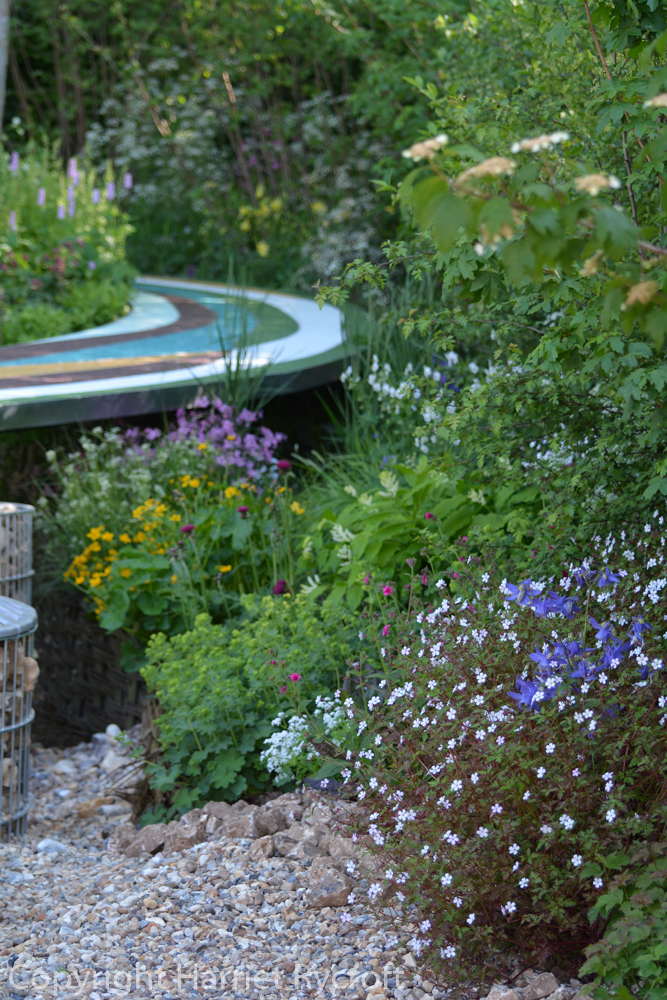 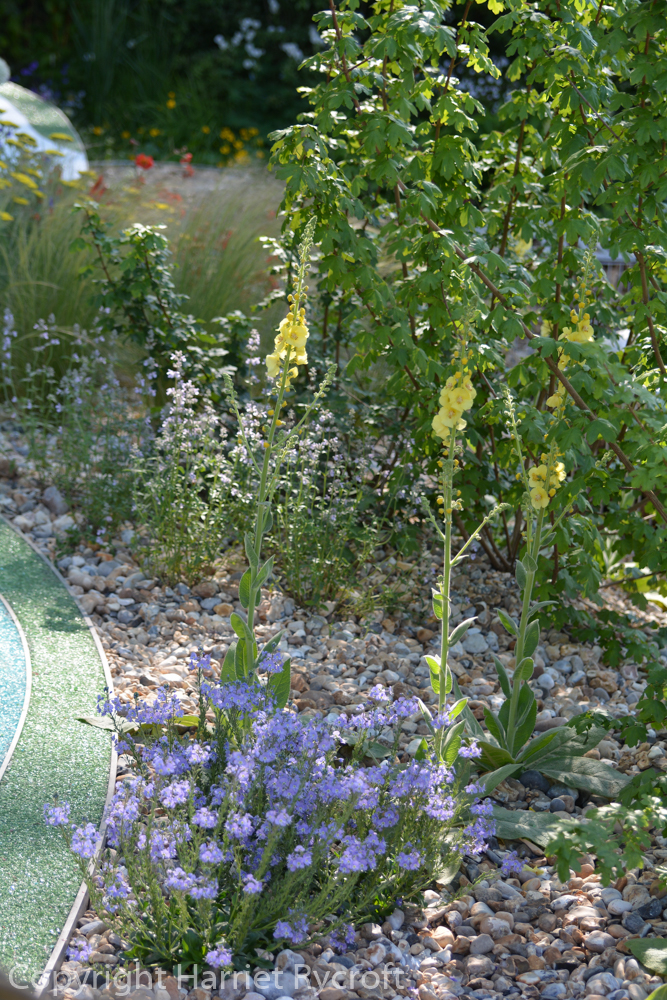 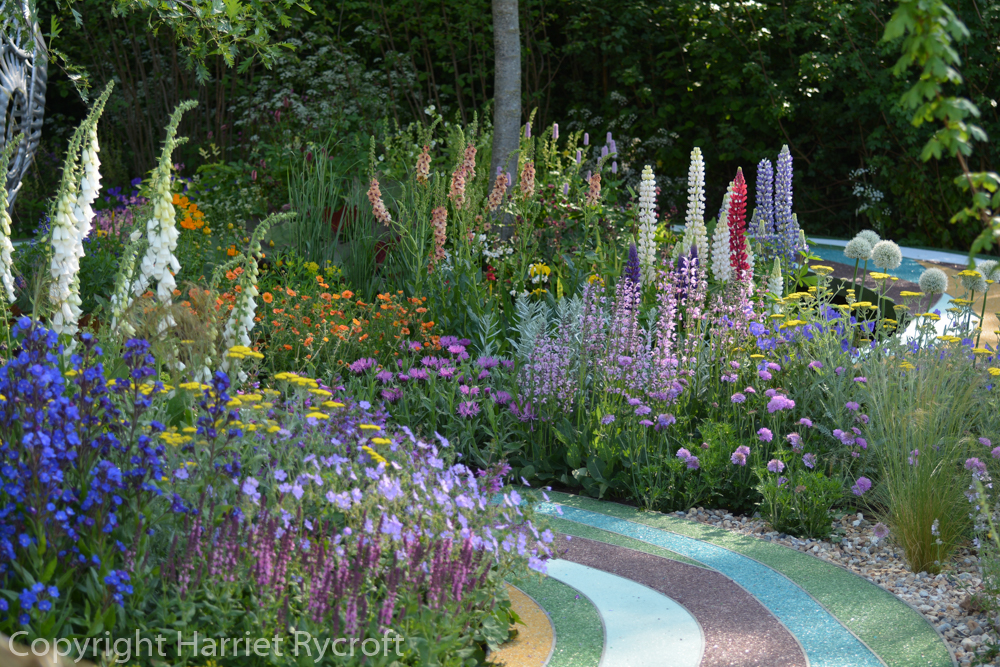 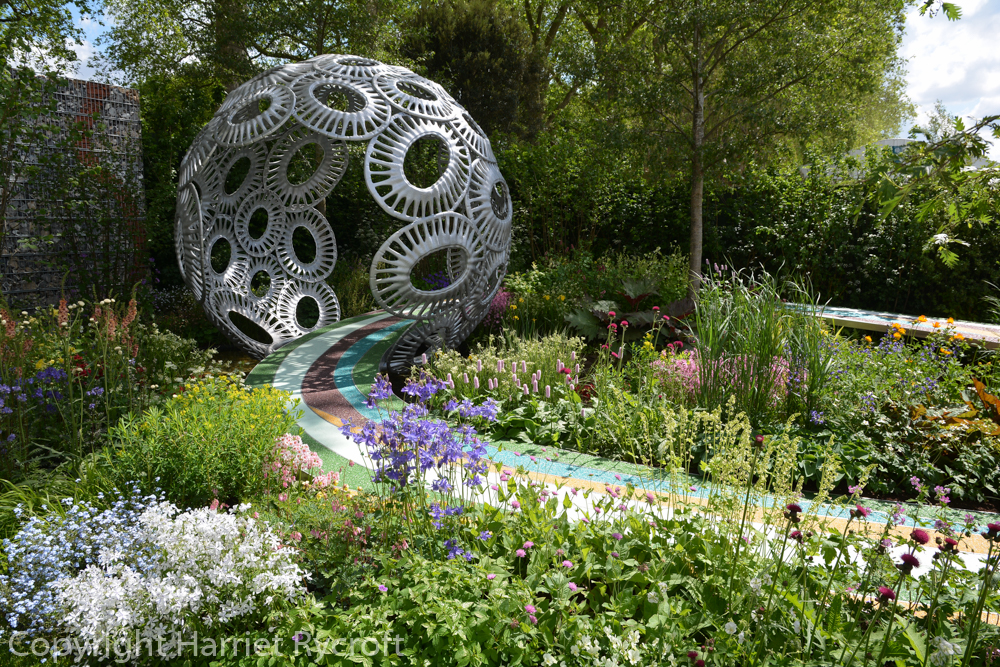 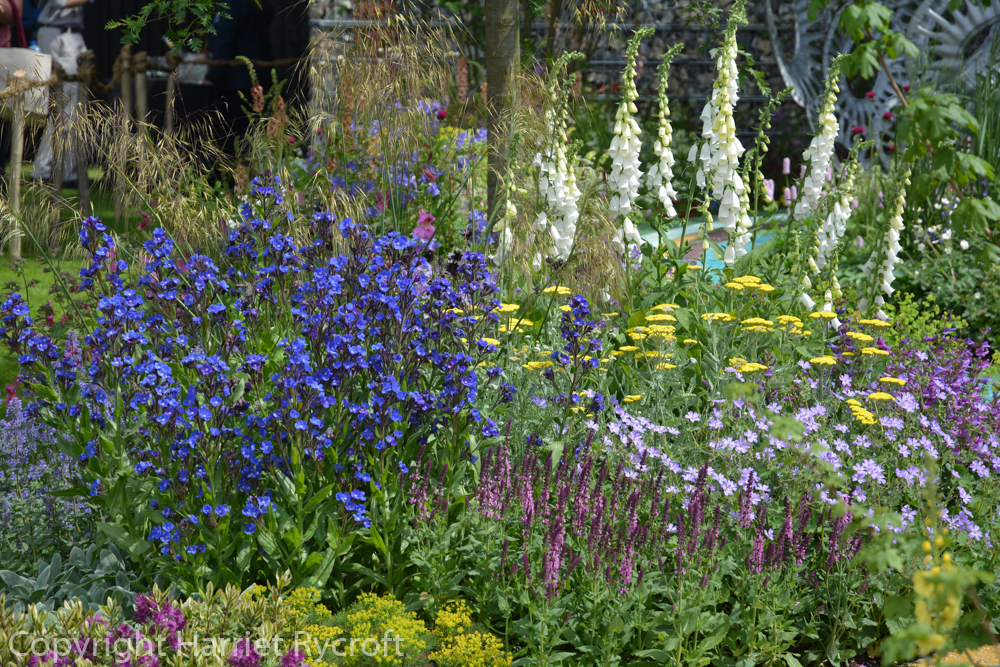 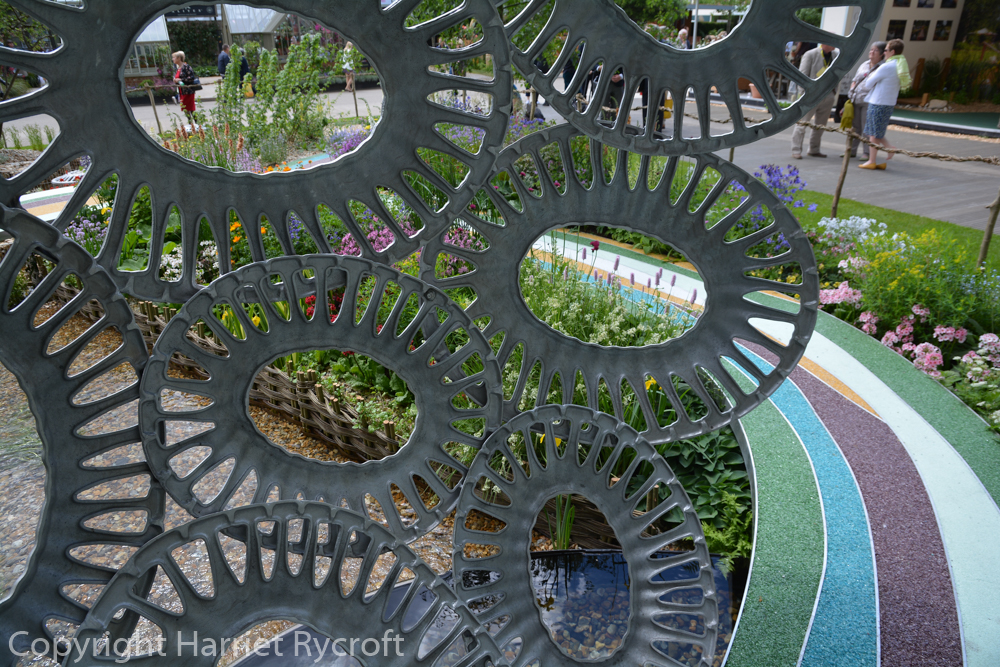 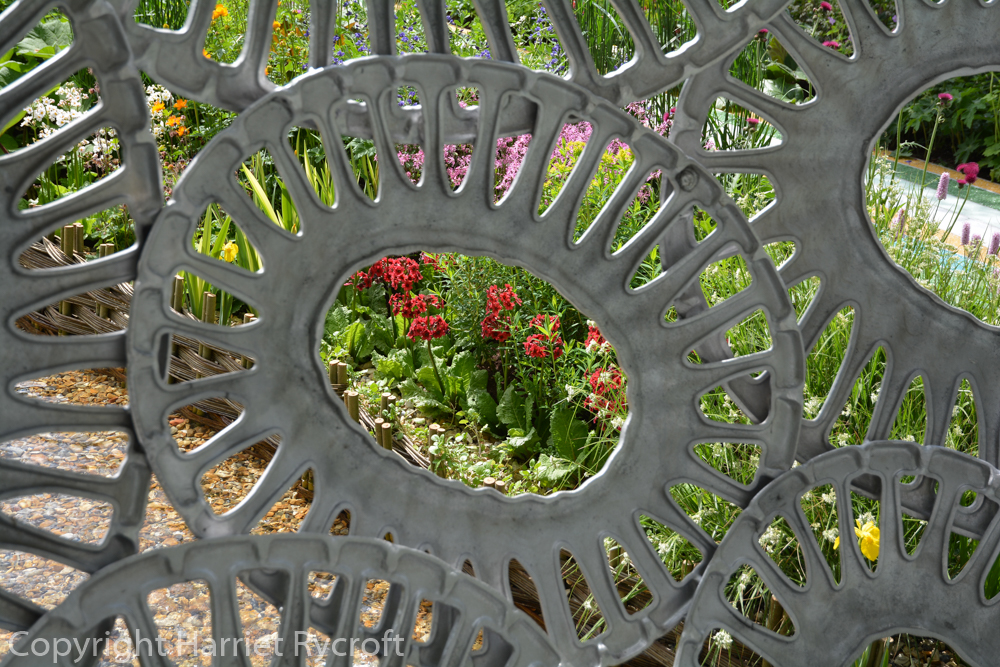 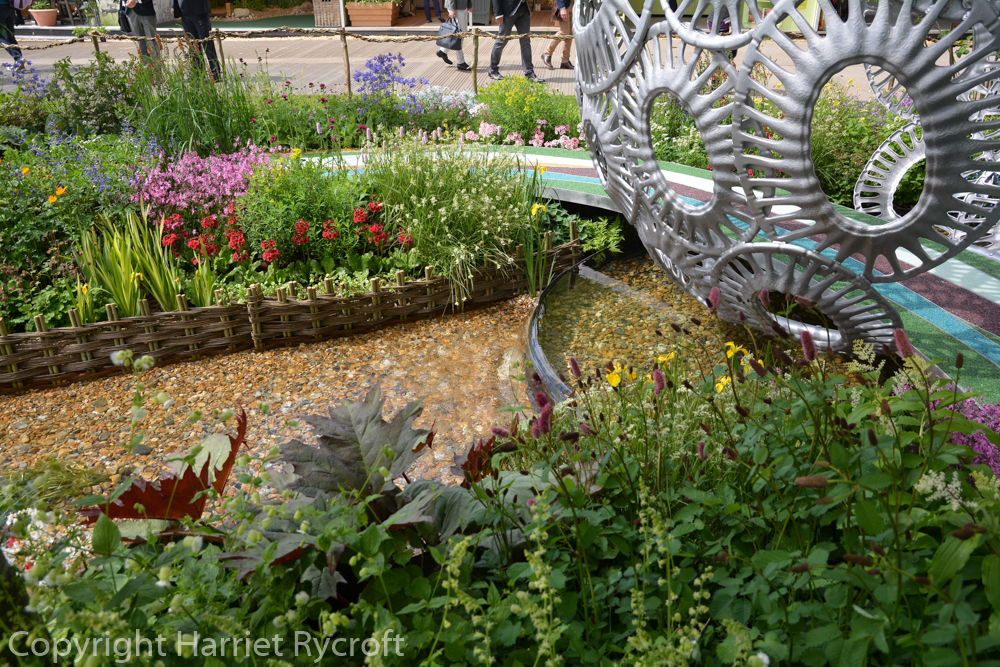 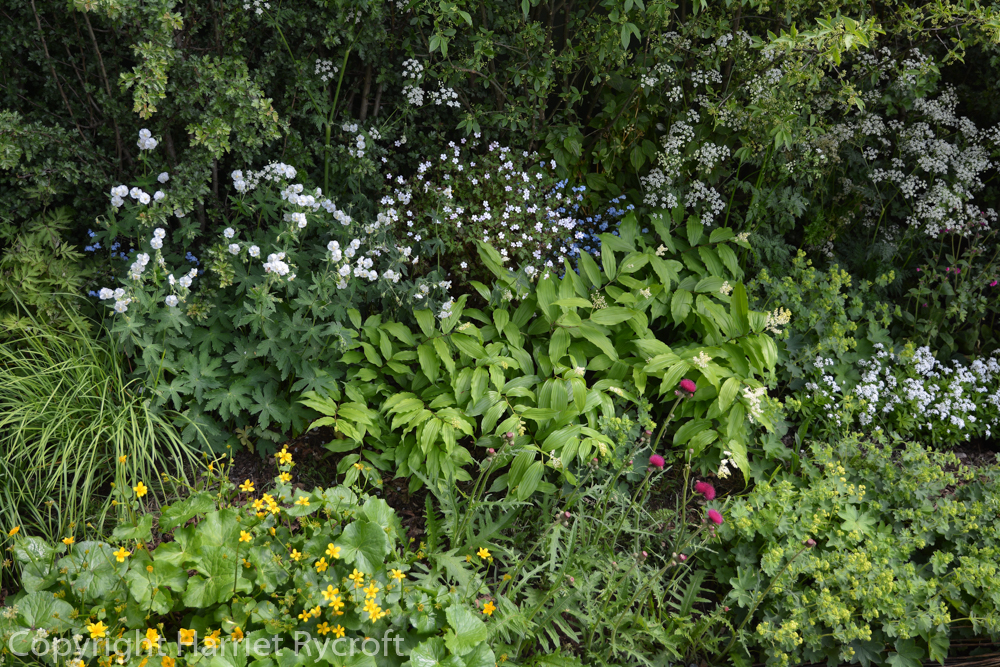 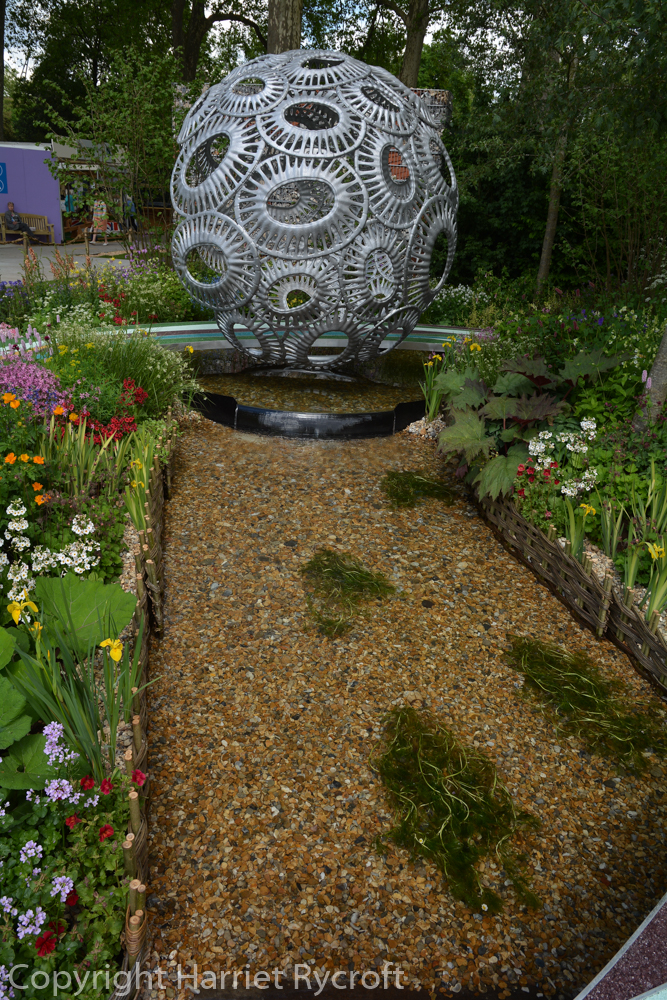 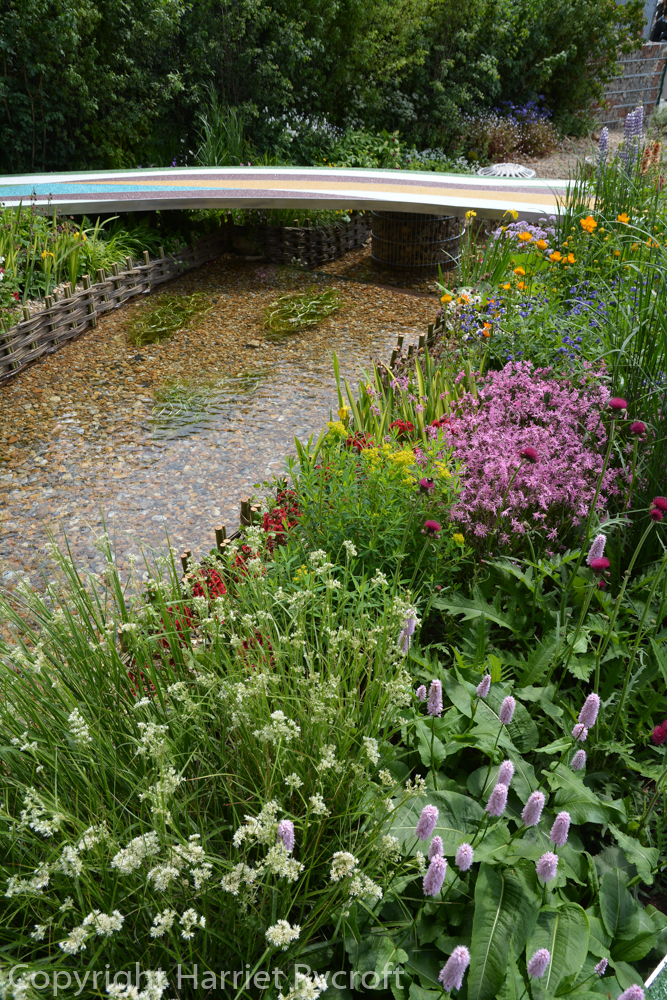 I feel sad that as I write this garden is having its last day at Chelsea. This afternoon most of the plants will be sold and tomorrow the whole thing will be dismantled, with the amazing aluminium coccosphere sculpture going to Horatio’s Garden in Scotland. But we all have a piece of this garden in our heads – and some lucky Chelsea visitors today will soon have a piece of it in their gardens.