Beaches – in which I try to ignore wintry greyness

As I write, a fierce gusty wind is howling into the crevices of our house and sleet is spattering against my window. I’m yearning for a few days of sea, sun, and sand in our wiches.

My treat of choice is a trip to the beach. Always has been, and I think always will be. Perhaps having an August birthday has something to do with it. I used to love sunbathing but that certainly isn’t the only attraction – that smell of salt/ozone/seaweed/sunscreen, the cooling wind, the sound of seagulls mingled with happy cries… Looking back through my photo archives there do seem to be an awful lot of beaches.

How on EARTH did I end up living in the North Cotswolds – just about as far from a beach as you can be in the United Kingdom?

Beautiful beach in Donegal. Why don’t I live somewhere like this?

The urge to reach that magical interface between land and water is a strong one for me, and what a bitter disappointment it is when I find that a road, a fence or nasty buildings are cutting me off. And private beaches should be outlawed! When a beach turned out to be an exclusively nudist one I have been tempted to tear my clothes off – but fortunately discretion is the better part of my valour.

Of course I love a sandy beach, and not merely for the exfoliation involved on a windy day. A clear expanse for everyone to scamper about on is irresistible, no wonder dogs get so excited about beaches – and it’s worth the awful stink in the car on the way home just to see your pet become insanely whizzy. 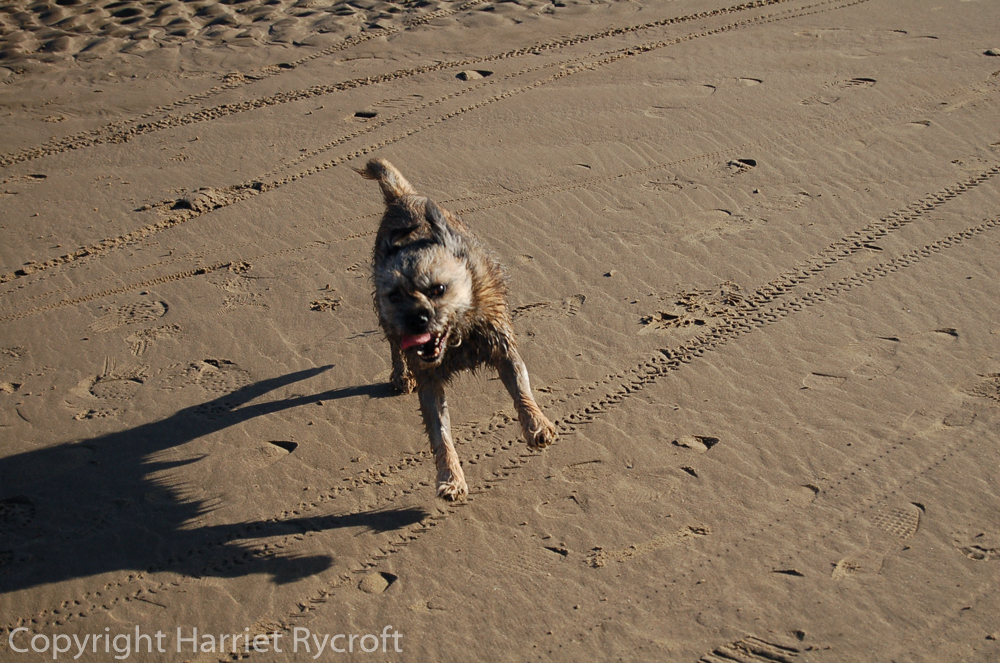 Archie. He’s gone to the great beach in the sky, alas, but he did a bit of whizzing while he was here. 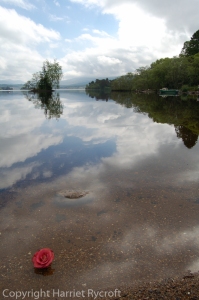 I like all sorts of beaches, not just the smooth golden sand: from stones and mud at the edge of freshwater lakes or lochs to chattering pebbles, volcanic grit, higgledy rocks and slippery seaweed. It’s partly a texture thing. If possible they are all best experienced barefoot. Taking my shoes off and getting my toes into the sand, that’s a delicious feeling. Challenging myself to walk to the water’s edge across foot-wrenching stones without wimping out and going back for my sandals. Testing the temperature of the water has to be done – in this country it’s usually cold enough to make your anklebones ache but you go in anyway, of course you do.

Being British, our usual modus operandi in summer is to lug vast bundles of towels, picnic blankets, parasols, cool boxes, fleeces, and wetsuits down to bag a space. It’s not the done thing to sit right in front of someone else and block their view of the sea, so we may have to trudge some distance, bickering about where to stop. Once we’ve selected our spot we have to find a large stone so that my husband, Chris, can perform the Windbreak Hammering Ceremony. If we’re in Wales or Devon we may need three windbreaks, carefully angled for optimum shelter. These are supplemented by bodyboards and the spreading of blankets until our territory is well and truly marked. 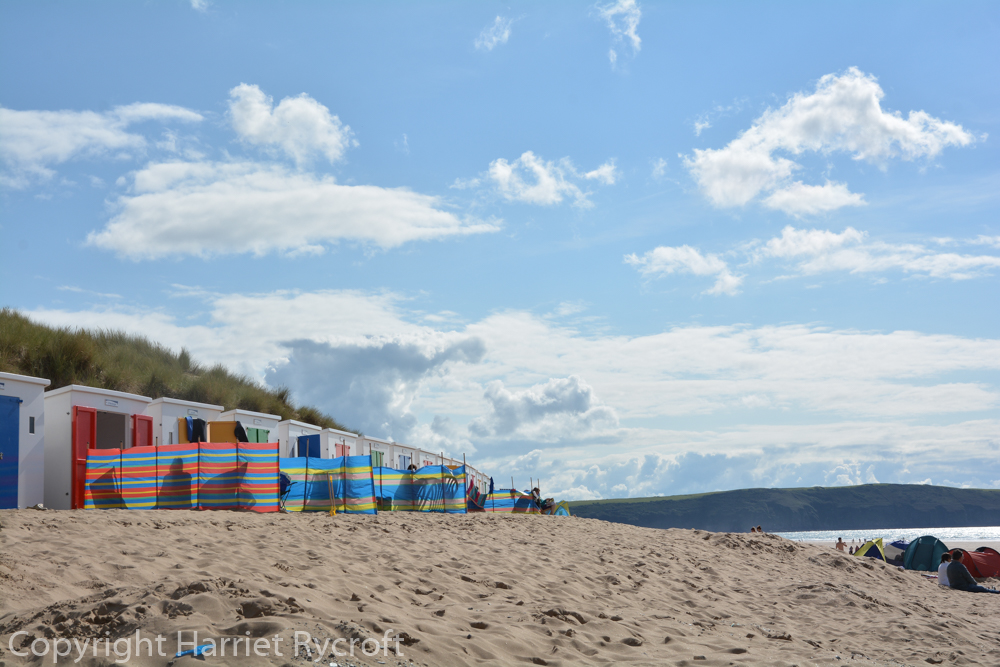 Windbreaks – essential items on most British beaches, even if you are lucky enough to have a beach hut. This is Woolacombe, Devon

Then it’s important that at least one of us goes in the water for a bit and reports back on the size of the waves or the frequency of jellyfish. We’re a bodyboarding family, so good waves keep everyone happy; in keener times we even bodyboarded in rain and biting wind, changing out of soggy wetsuits miserably in car parks as we cowered in the lee of the car, but we’ve gone a bit soft nowadays. 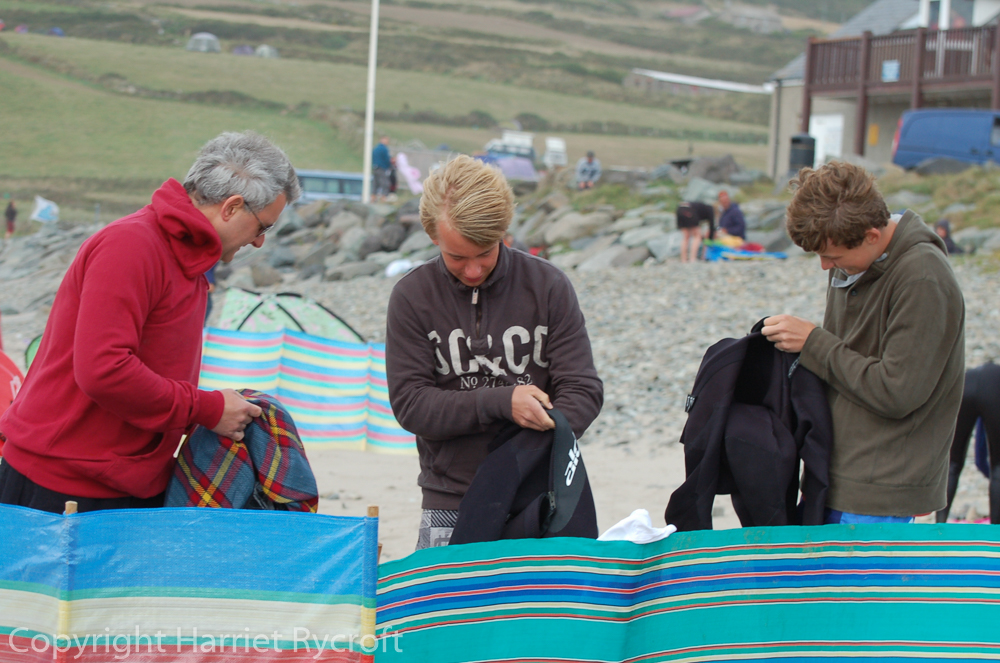 Getting ready to go in. Note windbreaks…
Whitesands, Pembrokeshire 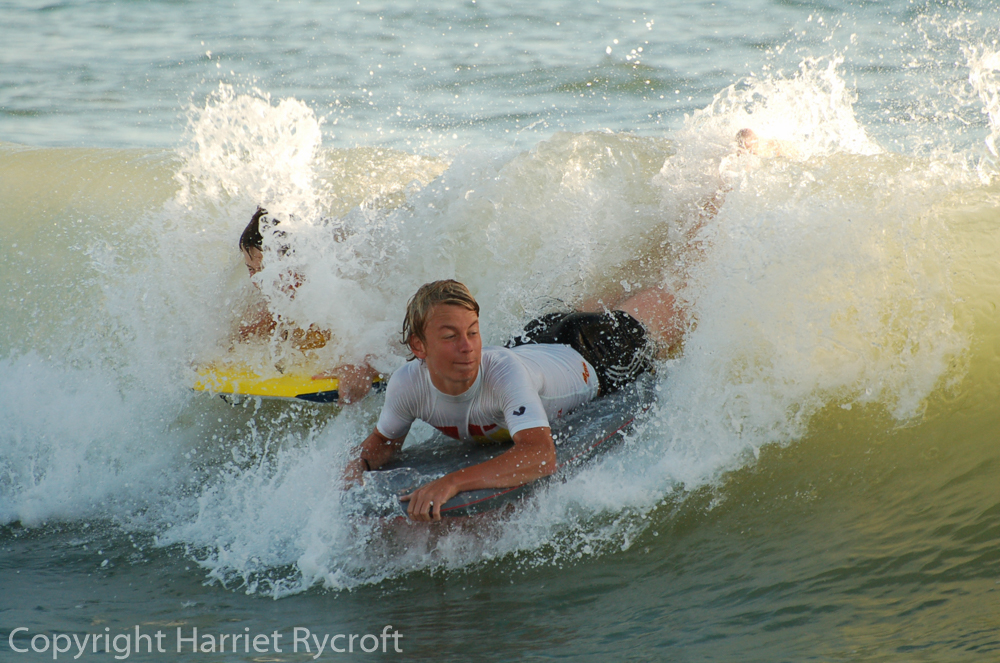 My boys bodyboarding in France, no need for wetsuits.

Oh I’m getting all nostalgic about family holidays! Looking back, now my boys are grown up and less likely to be at the seaside with us, I see that we were lucky, we did lots of stuff, from inept sand castle building, ferocious games of pétanque, infinity tennis and French cricket, to boat trips, sea kayaking, surfing and kite-flying. Then there is the luxurious waste of time which is lying on a towel reading paperbacks and getting some extra sleep. Aaaahhh. 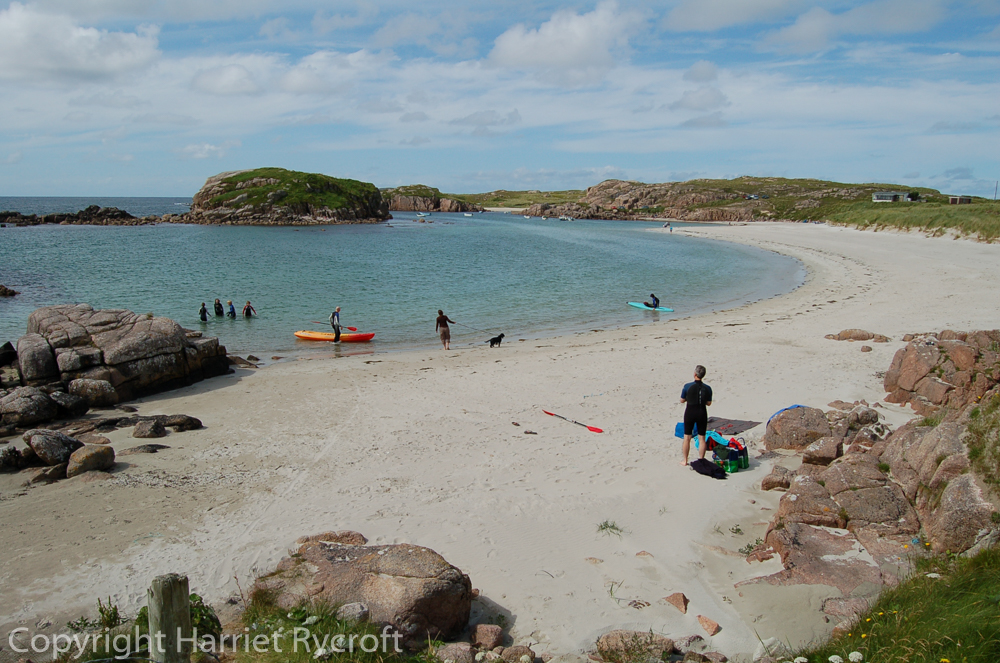 As a kid I was a keen horse rider and really, really wanted to go riding on a beach but never did. I’ve been twice as an adult, hire centres always give me a large, armchair-like horse – there’s nothing as ruthless as a horse owner assessing a rider’s weight! It’s worth the humiliation (and expense) however, because it’s just as much fun as it looks. 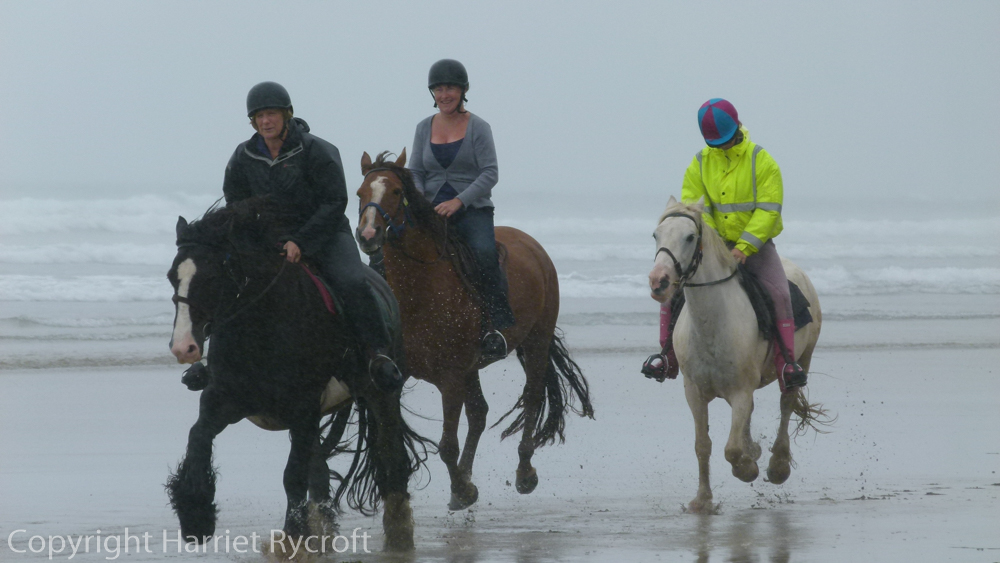 Riding on the sands at Druidston Haven, Wales. Fun even in the rain.

No need to participate in all beach activities – you can just be a commentator, it’s a bit like watching sport on the telly: knowing that we could do it better, it’s just that we can’t be bothered right now. I could be a brilliant kite-surfer if I really wanted to…

A beach day can turn anything into a sport – small boys flinging stones into the waves, children flinging sand in each other’s eyes as they dig bear traps and castle moats, the ice cream envoy trying to get back from the kiosk without five double conefuls of ice cream dribbling down to his or her elbows.

Last year one of the best bits of entertainment was watching seagulls open a family’s bags and extract their sandwiches. Yes, I know, we SHOULD have shooed them off but it all happened so fast and we were trying to squeeze ourselves into our wetsuits at the time. Honest. 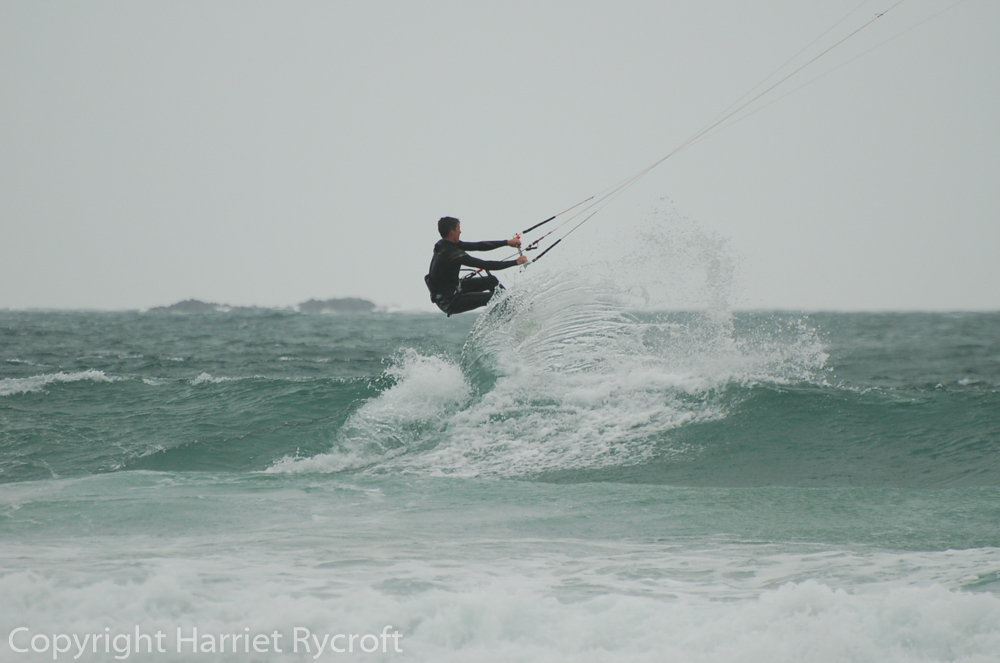 Of course he’s doing it all wrong. 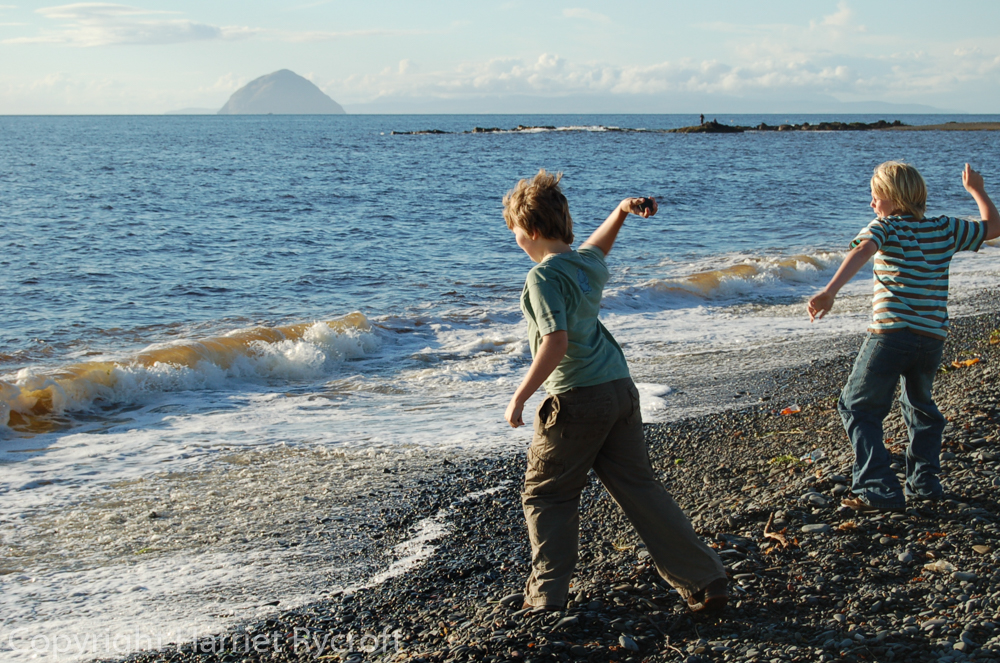 My boys lobbing stones into the sea. Is it a boy thing?  This is near Ballantrae, Scotland. The island in the background is Ailsa Craig.

It’s a time for relaxed conversations as different generations walk and chat in the shallows with their trouser legs rolled up. There’s time to sit and think. Or not think. Or sketch.

I’m an avid beachcomber, as are my mother and sister and I’ll show you one of our favourite beachcombing sites in another post. Without even looking very hard it’s amazing what you find washed up on a beach.

Washed up by storms on the same beach on the west coast of France – one Portuguese man o’war, one fishing boat. 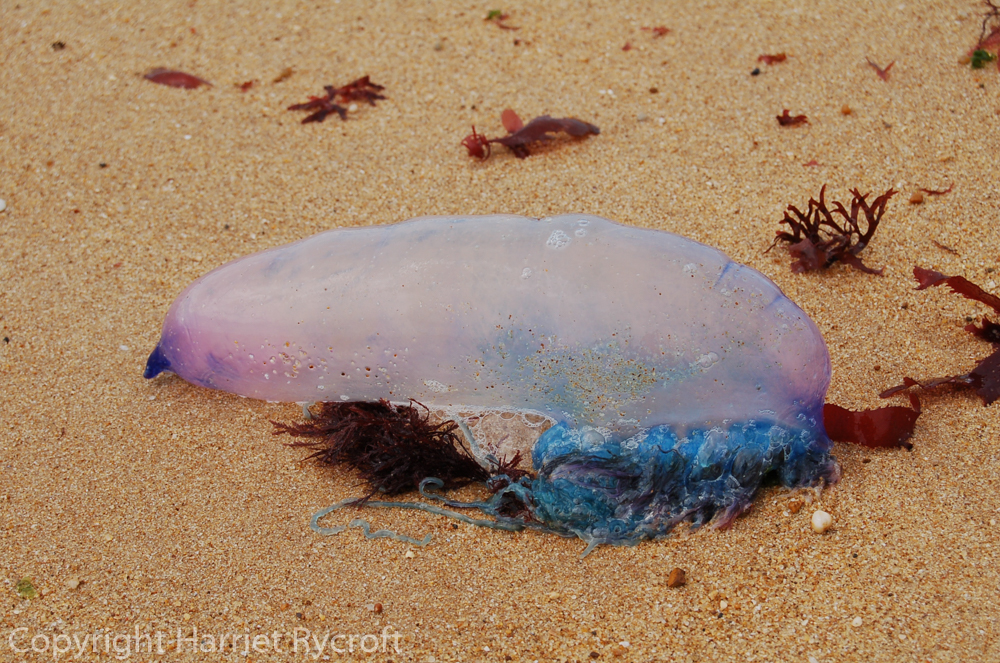 One year at Croyde in Devon we had great fun seeing who could find the biggest spider crab. But we didn’t eat any.

I also love poking about in rock pools. Rock pools aren’t what they used to be on British beaches. Sadly they seem to be reflecting the state of the rest of the seas, and I wish there were 70s style Government Information Films still shown on the television so that holidaymakers could learn to be careful about returning creatures gently to their original places and replacing stones turned over in the hunt for crabs. Pools by busy beaches are often scoured empty by the end of the summer.

I usually take a plastic tub with me so that I can have a closer look at whatever I find, have a little chat with it, and then put it back. Ever since getting mildly cut off by the tide while rockpooling at the age of about ten and suffering the embarrassment of being rescued by my mother I keep a wary eye on the time and tides too.

Rockpooling. These magical little worlds must be left as you found them. 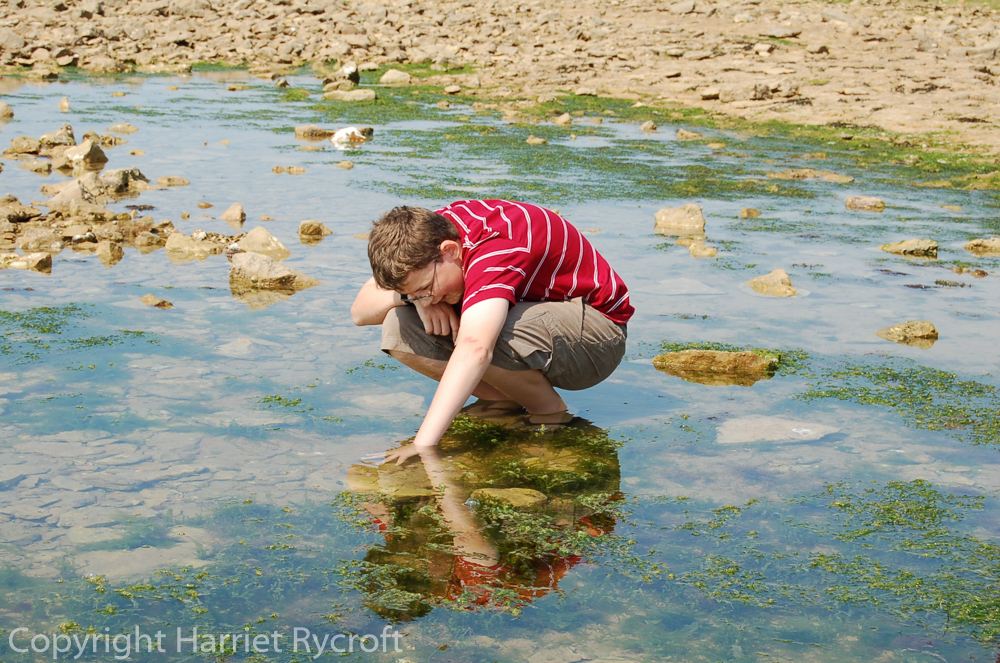 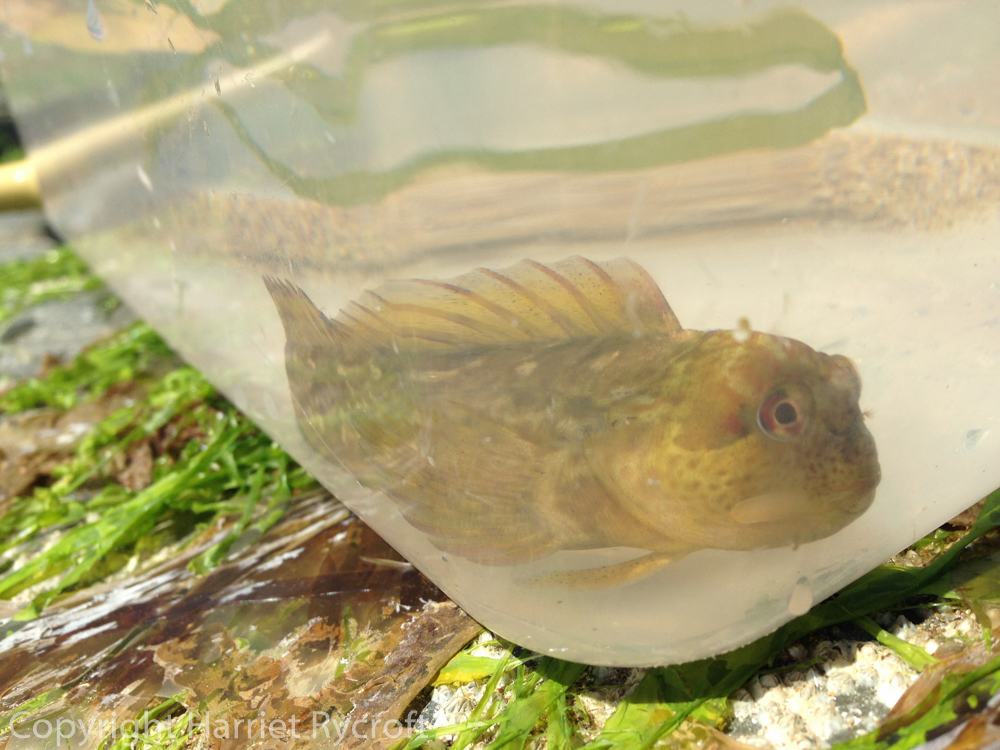 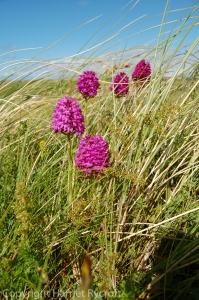 If you look up from your Maeve Binchy and find that I’m not lying next to you snoring gently with a book on my face first check the rockpools, then the place where land meets beach because I’m bound to be looking at plants. I’ll do a separate post about coastal flora because I have a BILLION photographs. You can take the gardener out of the garden but… 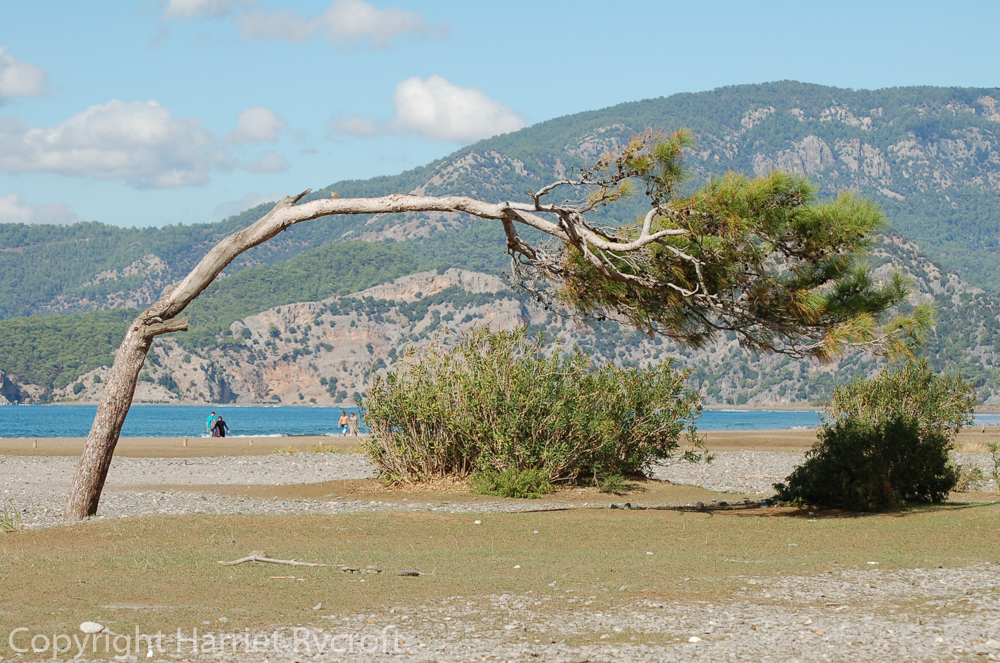 And then it’s time for more sitting and thinking, maybe a cup of tea from the thermos (yes we brought that too). Listening to the waves thud and hiss, watching the tide creep in and wondering whether to warn that snogging couple that their flipflops are going to float away. 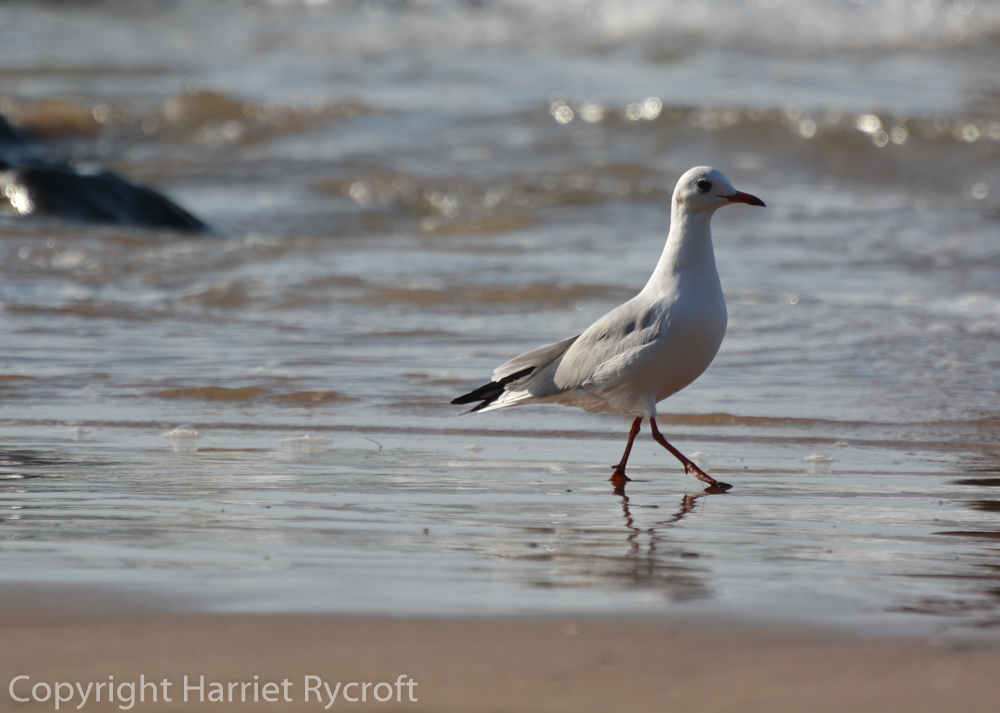 The best, oh the very best thing is if the weather is balmy enough to stay until the sun goes down and the last light skips on the waves, waves which seem louder now as you head home with tingling skin and a pocket full of sea shells. 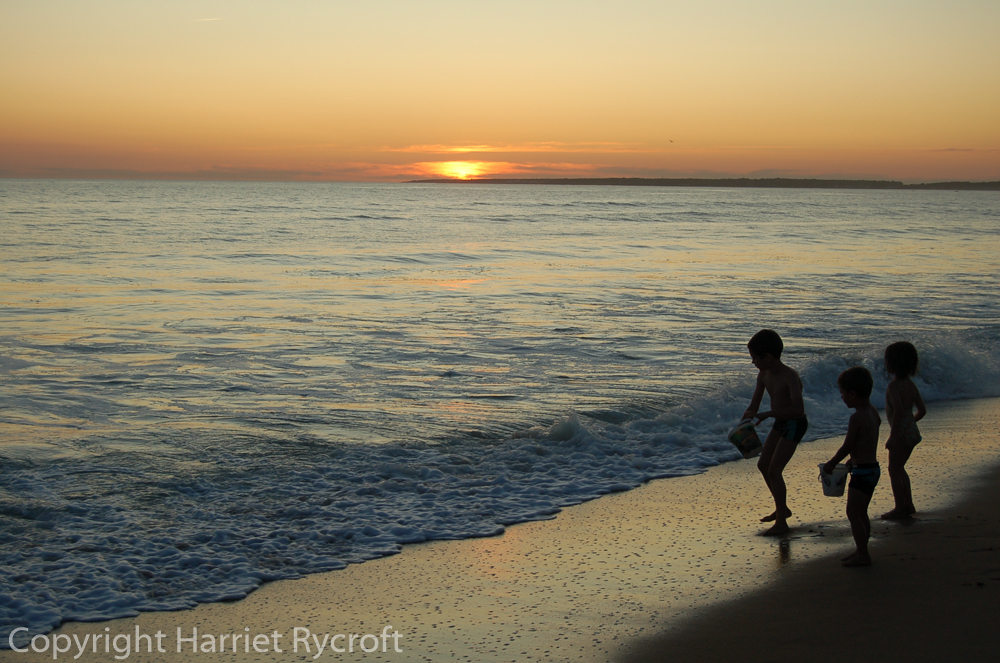 Not time to go yet. La Tranche-sur-mer, Vendée, France