Every year the Chiltern Seeds catalogue plops through my door and exhorts me to “Grow something new from seed”. Being a naturally obedient person I do just that. Not just from Chiltern but from Kings Seeds, JungleSeeds, SpecialPlants, Higgledy, Suttons, you name it… also from my pockets (usually unidentified and may have been through the wash) and from friends. 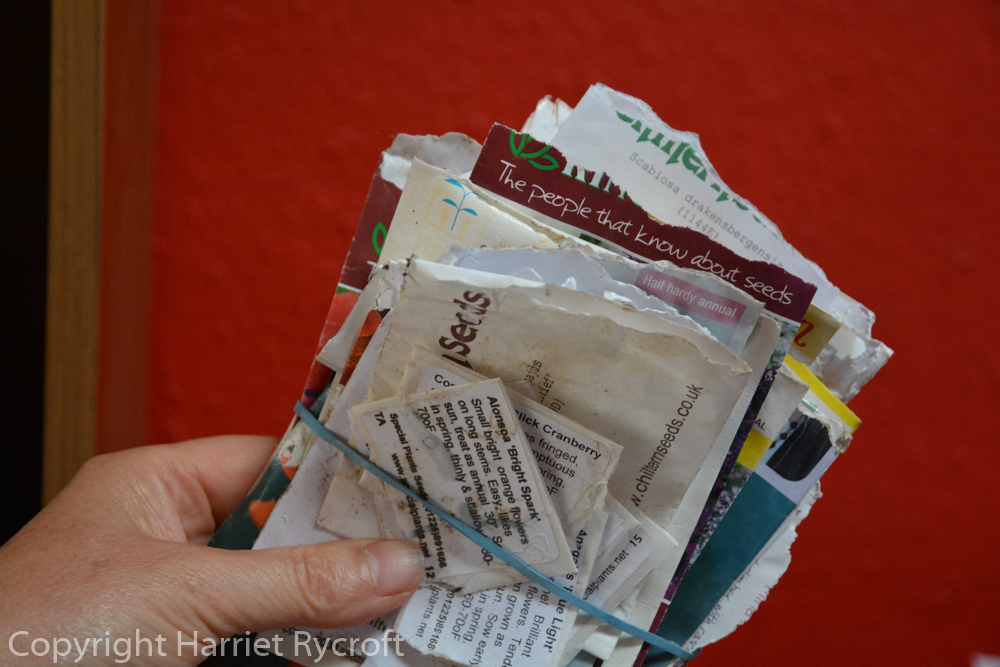 My empty seed packets have been feeding snails in the greenhouse 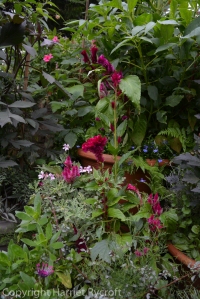 This year I grew a pink Celosia. I’ve never grown Celosia before, always thought it looked a bit municipal, but this year I gave myself a slap and told myself to stop being a plant snob. Turns out I like Celosia. Can I remember where I got it from? Of course not. I have rummaged through my haphazardly-filed orders, the snail-eaten bundle of packets from the greenhouse and the dusty tin of half-used packets in the shed. No celosia. Can I find the labels from the plants growing in the pots? Are you joking? 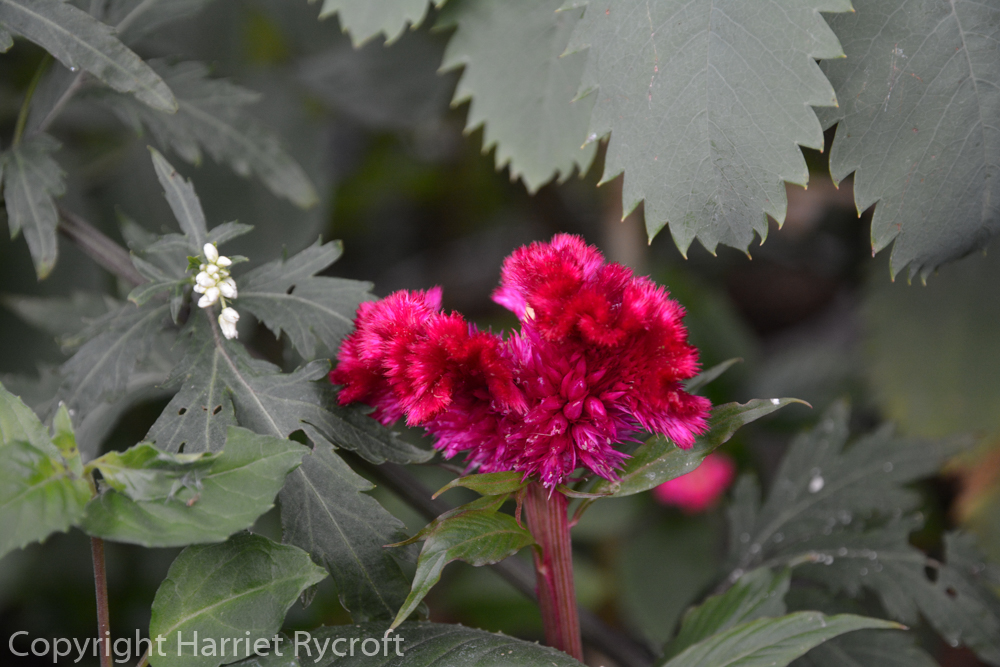 Anyway, it’s good. It may possibly be the variety ‘Flamingo Feather’ as the descriptions I can find online seem to fit it fairly closely. My plants are a bit spindly because I sowed late, pricked out late, potted up late, planted out late, watered erratically, fed meanly. So far so normal. But they are flowering gamely in a variety of weird,shiny plumes and I like them. I shall try more next year. 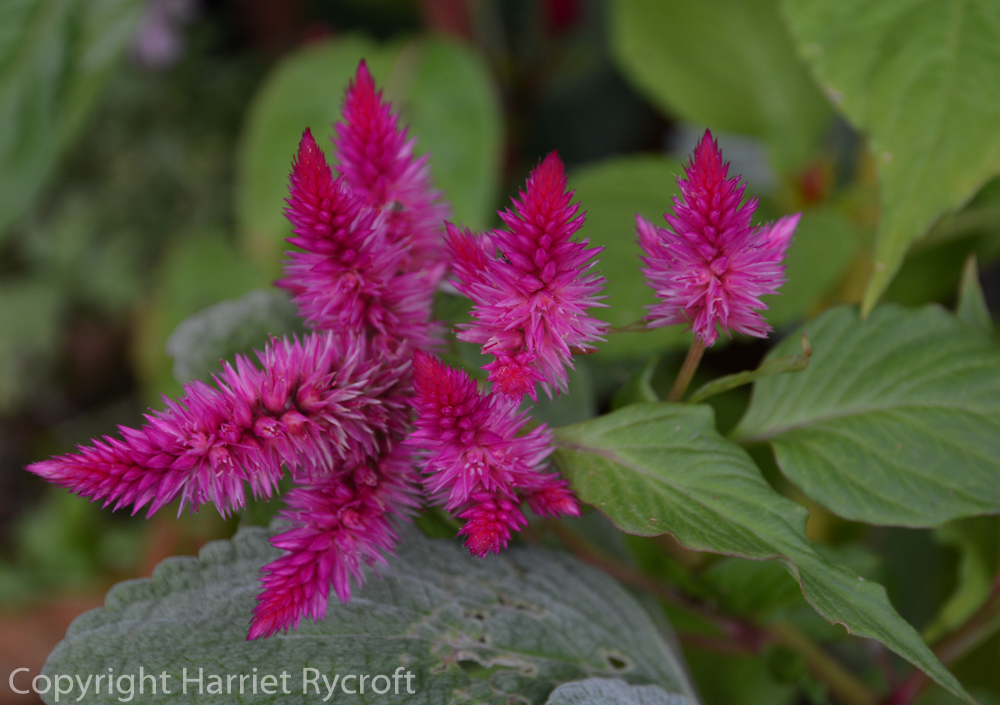 Today I went to Ball Colegrave’s display ground and the first plant to catch my eye was… a Celosia. This one has dark foliage (best colour if you starve it slightly, apparently) and contributes a lot to the scene even before it flowers. It’s called ‘Dragon’s Breath’ and I want it even though the name conjures carnivorous halitosis. I’m always looking for interesting foliage for my pots,  the dark flowers are a bonus, toning with the leaves. 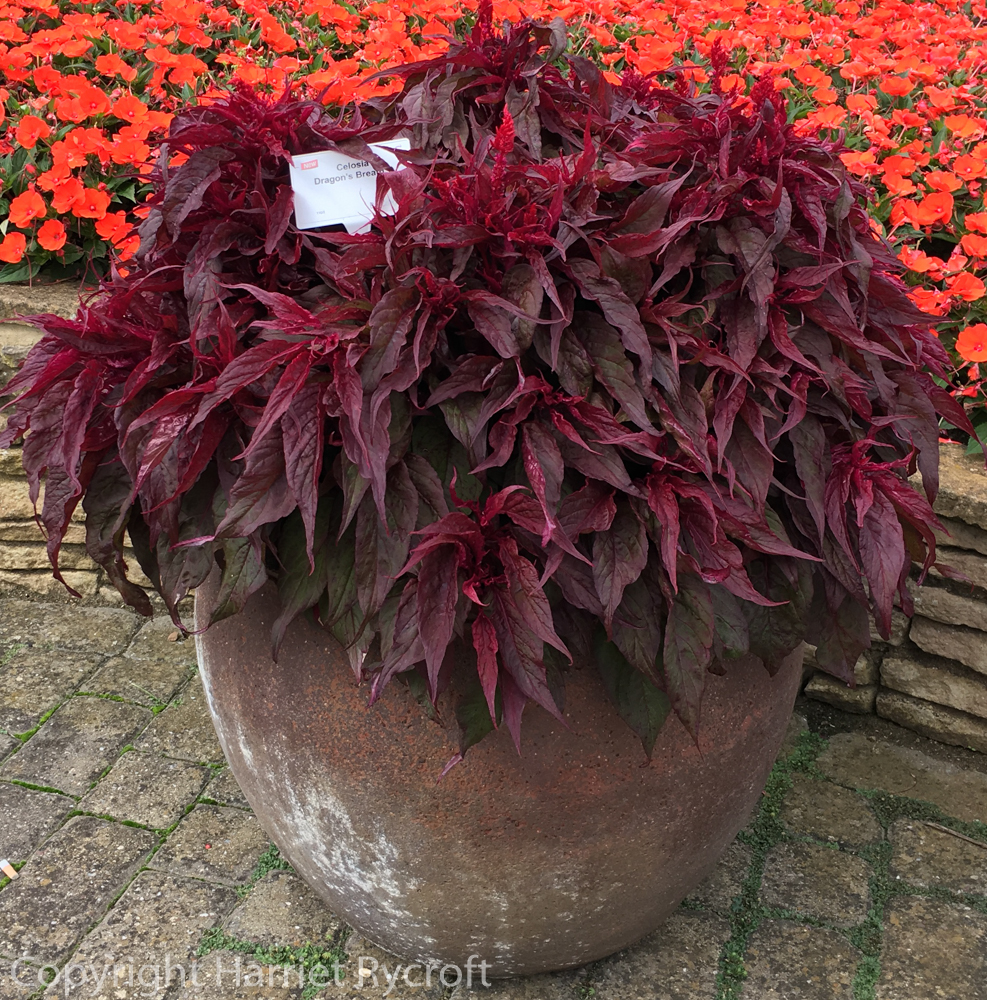 There were also Celosias in the ground, with the more familiar bright yellows, orange and reds used well in themed (“Bollywood”, “Brilliant Bling”) block-planted bedding in the show garden. The feathery flower plumes contrast well with the dots and circles provided by so many other flowers, giving a change in texture as well as form and swaying nicely in the stiff North Oxfordshire breeze. 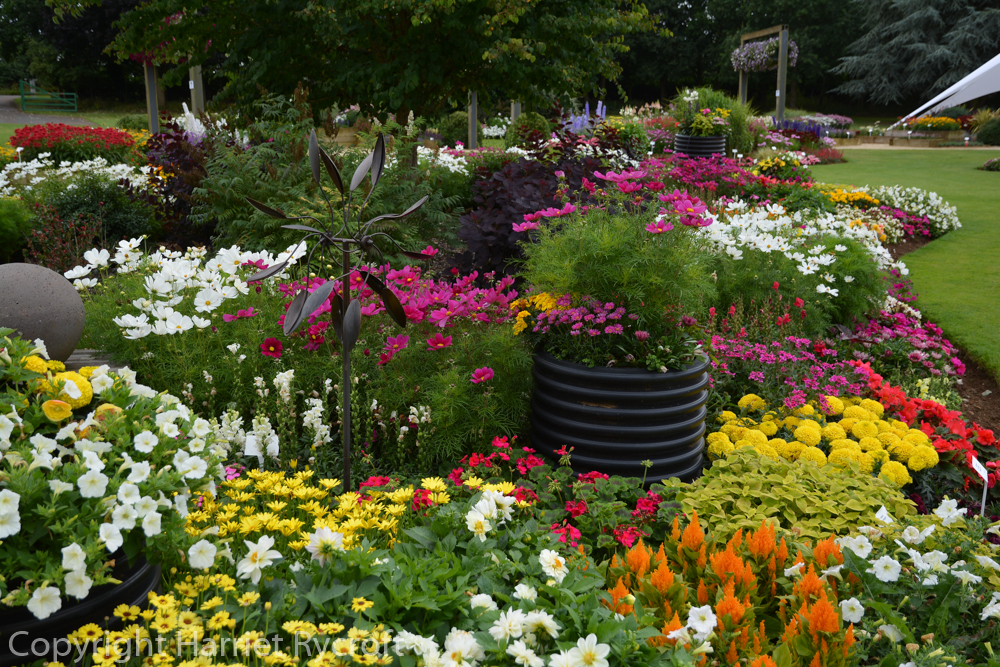 In the glasshouses there were tall, fat yellow and red Celosia ‘First Flame’ being explored by bumblebees – it had never occurred to me that this was a plant which might be popular with bumblebees. These fiery characters would be good in a big, dramatic planting. 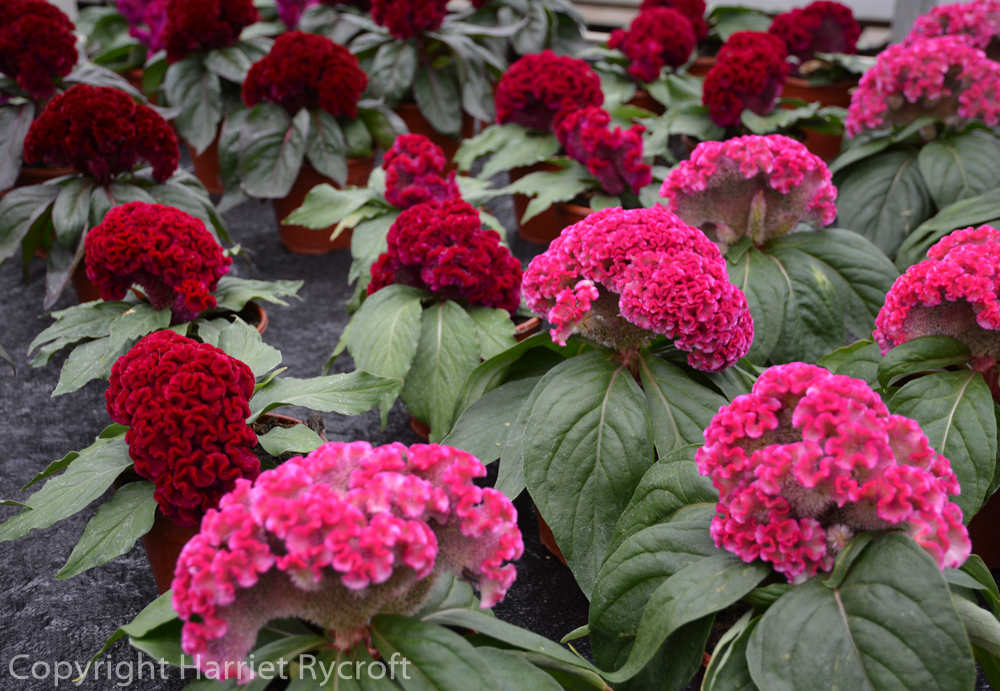 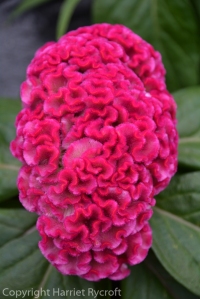 I have seen pictures of cristate Celosia – the ones which justify the common name “coxcomb’ and never really could work out how I might use them but Ball Colegrave had an ‘Experimental’ series which made me laugh and resolve to seek out cristate forms to grow. They ranged from pink, vaguely brain-like to sumptuous crinkled dark red velvet. I’ll think of something to do with these even if they are just a talking point. I wonder if they’ll call these Celosia ‘Dragon’s Brains’? 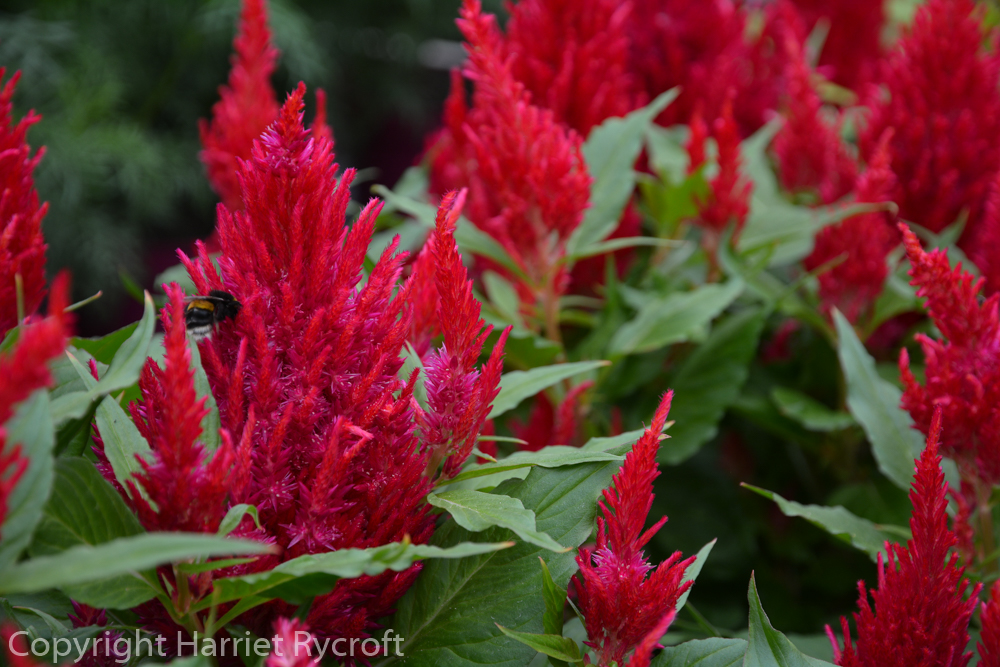 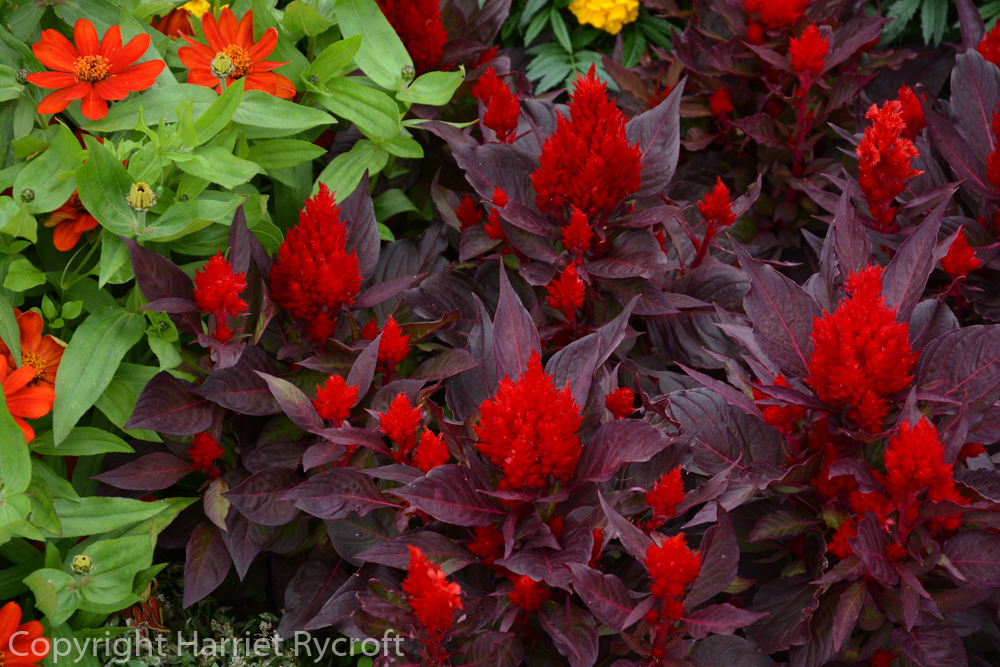 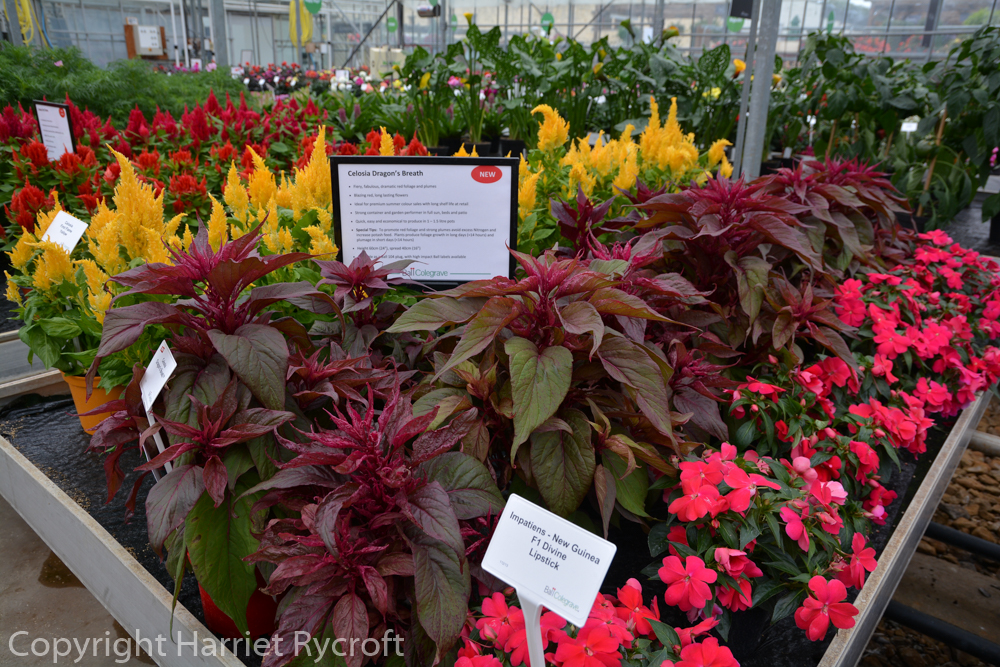 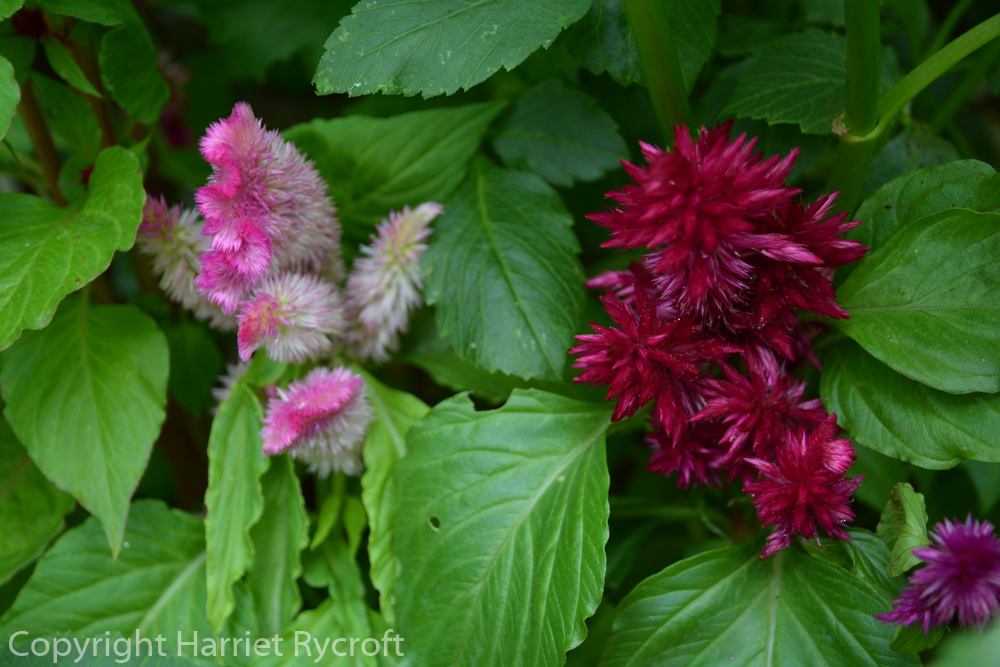 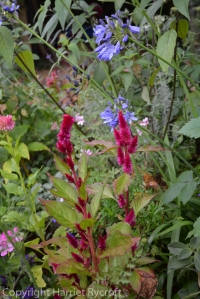