As we cross the threshold of another year I’m thinking about front doors.

Keeping on top of home gardening tasks is like trying to get in and out of a revolving door which moves just a bit too fast. New Year comes round and so do thoughts of all those things I meant to do. I dash out and if I’m lucky get fifty percent of my tasks completed before it’s time to jump back in again. The garden path to hell is so paved with things I didn’t get around to that my husband’s aunt once helpfully gave me A Round Tuit (it looked suspiciously like a saucer), but it wasn’t much use. Perhaps I should have got round to reading the instructions.

Last May Chris and I went on a road trip to Berlin and although there were MANY interesting sights along the way I repeatedly found myself looking at front doors and admiring the different ways people presented and used the public face of their homes. As a result one of my New Year resolutions for 2018 is to improve the look of our front garden, which could be more attractive and a lot more sociable. I think the Americans call it “kerb appeal”. This year I may at last jump out of the revolving door of resolutions at the right moment.

A street in the centre of Utrecht

The first stop on our trip was Utrecht in the Netherlands. Having spent most of the day at the wonderful Botanic Gardens we cycled back into the old city centre, parked our bikes and just pottered around.  This wasn’t as relaxing as it sounds at first because, being British, we were used to bicycles staying mainly on the roads – here they were everywhere, hurtling up from any direction, only sometimes given away by the puttering sound of tyres on cobbles. It took a while to get used to having to check over our shoulders before turning but we soon learned that we could stay relatively safe from the silent slicers by making no sudden movements.  It was a Monday evening in May, tables outside restaurants were full, students lounged about, there were almost no cars and the vibe was calm and cheery. We didn’t need sudden movements. 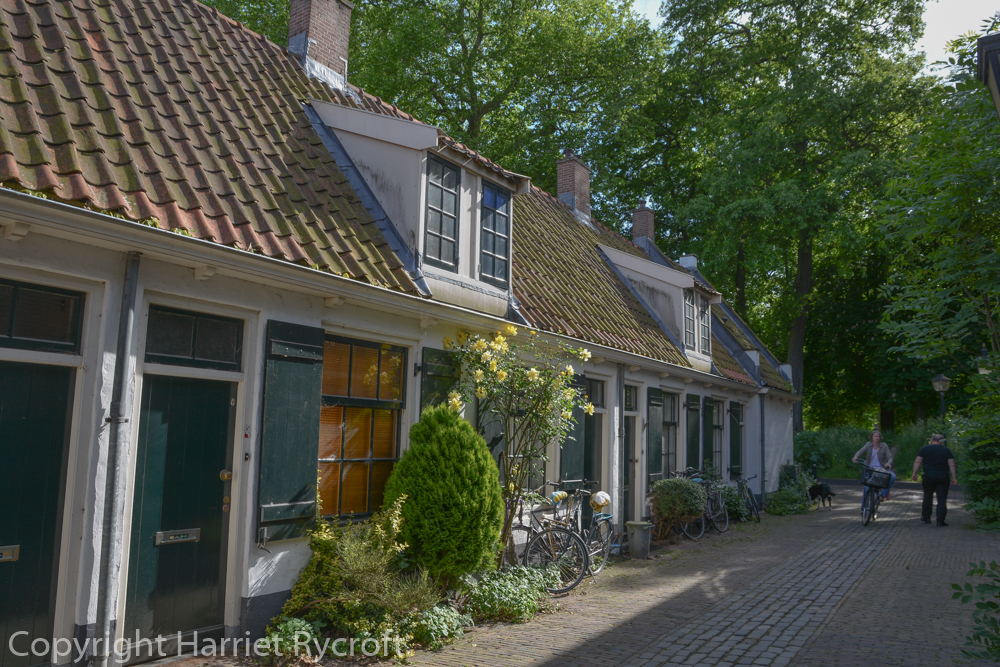 Puttering about. Bicycles and feet are the best mode of transport in Utrecht

The small, quiet residential streets of the old town were a delight. Doors and windows were framed by plants, these grabbed my attention as usual but more importantly there was seating by most front doors. How lovely to sit among your potted plants and natter with your neighbours on a sunny evening! Echt mooi. I wanted to be Dutch. All that relaxed loveliness and you get pancakes! I felt sadder than ever about the madness of Brexit. 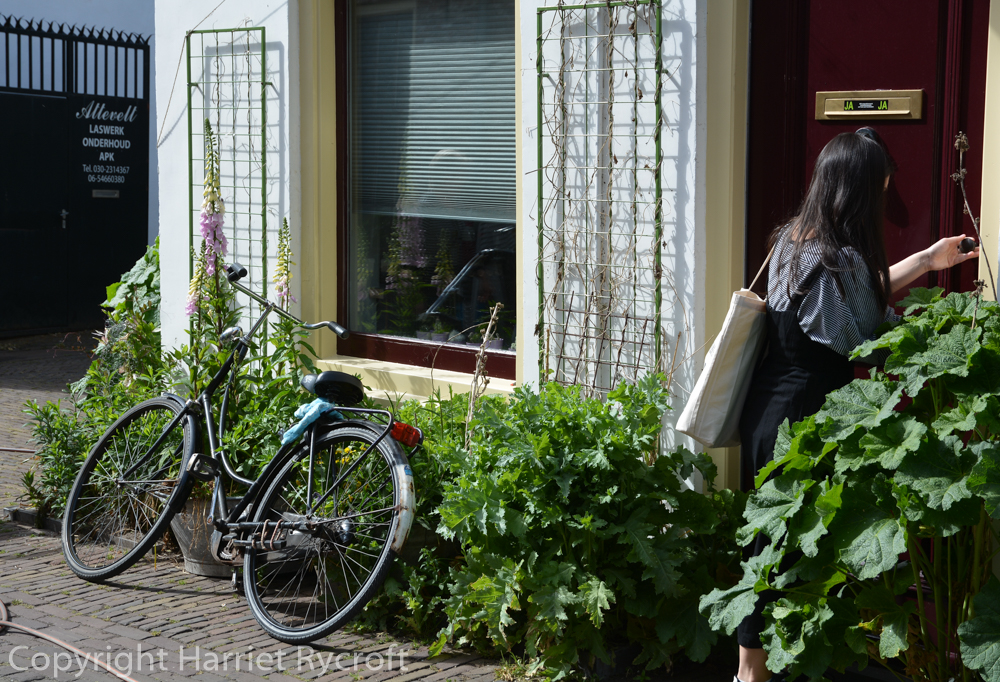 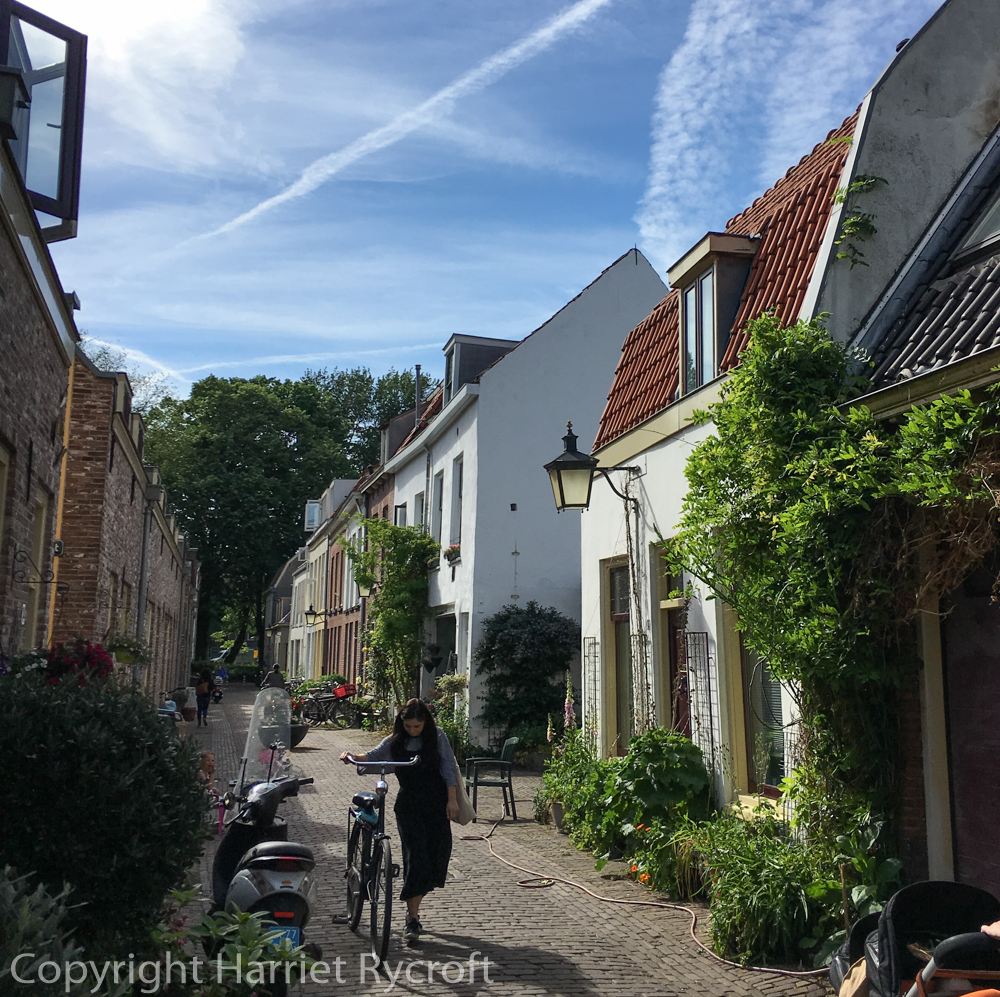 From Utrecht we continued to Lübeck in Northern Germany. We explored the city on Father’s Day – on which we were told that the men go off with their mates for the day. At 9am there were groups of men wheeling trolleys of beers into the park, while others headed into the countryside clutching fishing rods or, lycra-clad, on fleets of bicycles. It was all very jolly.

Fathers Day beer by the river in Lübeck. It was 9am. 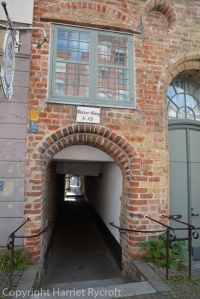 Down the rabbit hole

Most of the shops were shut but we didn’t care. Museums and churches were open, we visited many of these but mainly we just wandered around the streets and the famous Gänge. The Gänge are ancient alleyways which lead off the main streets, often through tiny passages, they are lined with houses and far too narrow for cars. Some are so picturesque they have opening and closing times to give the residents a break; even with snooping tourists they are all idyllic refuges from the usual kind of city life.

At first I was reluctant to intrude, tiptoeing between the pots,barbecues and airing laundry with my eyes averted from the windows, but no one turned a hair. Ladies whose men were probably off gallivanting for the day ignored the rubberneckers and carried on chatting peacefully outside their houses. Soon I was diving through the tiniest gaps between houses – I did try to avoid taking photographs directly into faces and windows (although many windows have artful little displays for public consumption) but it was all so charming and so very relaxed. I wanted to sit with the residents and chat but my German is confined to a small amount of menu-related vocabulary. Haben Sie eine Spargelkarte? I wanted to be German. 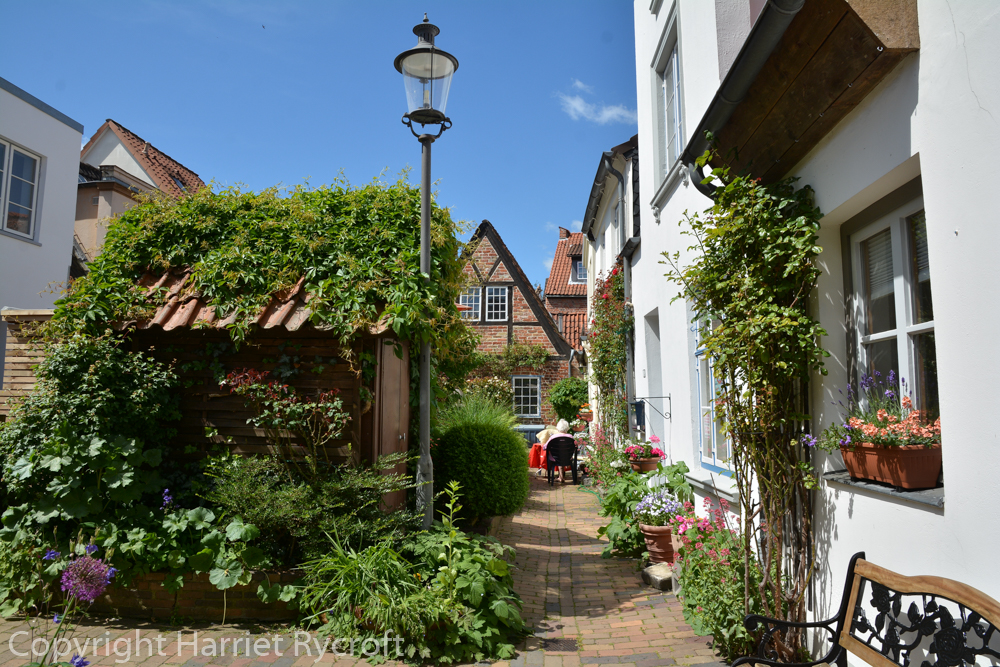 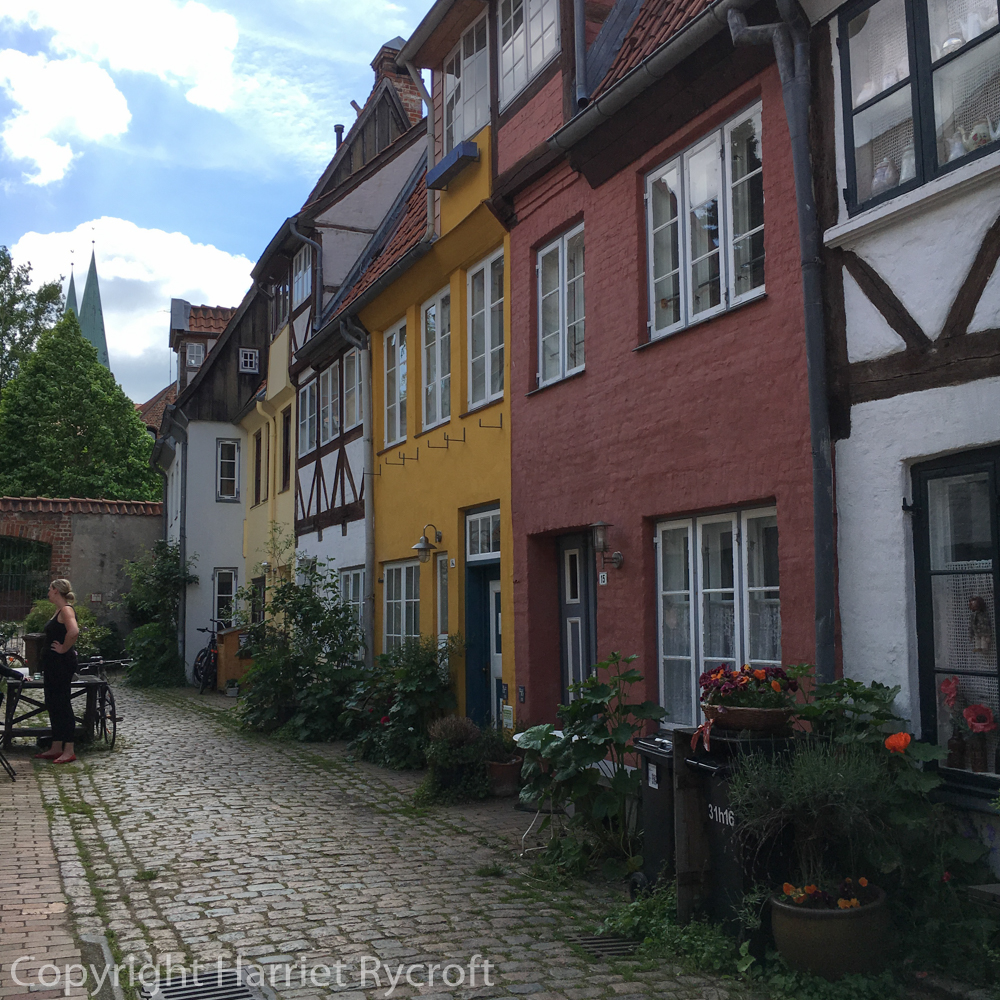 I know that I was looking at the most attractive bits of two very special cities, and looking at them through my rose-tinted holiday glasses, but there were plenty of ideas there which could be applied to most homes in most neighbourhoods. Even if it’s just a lick of paint on the front door, a chair for watching the world go by, a bowl of water for passing dogs or a bunch of flowers in the window there are lots of small ways to make the outside of our homes more friendly.

There were four common denominators for successful front doors, euro-style:

Potted plants – from tiny baskets of violas to matching pairs of conifers and ramshackle collections of containers – the cumulative effect down a street is life-enhancing, each owner expressing themselves, whether smart, quirky, artistic or slightly bonkers. In practical terms the plants have a cooling effect on a warm day, they baffle whipping winds which would otherwise scour the street, they provide a little privacy.

A place to sit is a must-have – some people made do with doorsteps but benches abounded. There were smart benches, painted to match doors and windows, folding benches which doubled as storage or tables, furniture ingeniously made from old pallets… the important thing was a shareable place to sit, even if it was a plank supported by a few bricks. 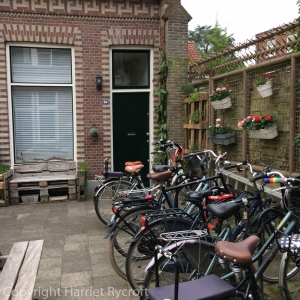 Bicycle parking at the end of a cul de sac. Note the pallet bench.

A parked bicycle is so much less obtrusive than a car, and cycling is an easy, quiet way to nip round to see a friend. If only we weren’t such slaves to the car in Britain! 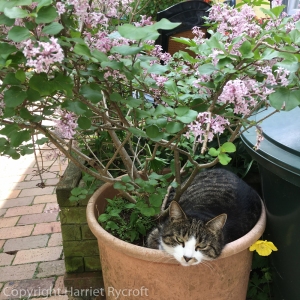 Cats are not obligatory but where there is peace, sunshine and a place to sit you will find cats. The cats of these streets were smug even by feline standards.

We live on an ordinary English street, where cars drive just a little too fast, bicycles are ridden for strictly sporting reasons and neighbours don’t talk to each other much – but it turns out that I already have those raw ingredients for a Remain front garden… There’s a gravelly space in our front garden where a bench would fit. I am walking a decrepit wrought iron one slowly from the far end of the back garden. Once it has reached its destination I will need to source a large planter to go next to it, it’ll have to be a big one because even wearing my Hat of Resolution I will not water it as much as the pots in the back yard because it’s a long way from the hose. Might have to use lots of succulents, or maybe some grasses.

I might even get my bicycle out of the garage.  Once it is all set up I shall make time to sit on my euro bench as it will get the evening sun. Join me for a beer?